We can design and roll out hundreds of stations with speed and accuracy.

Our process is repeatable and proven to bring success.

We follow all required city and community guidelines for maximum efficiency. 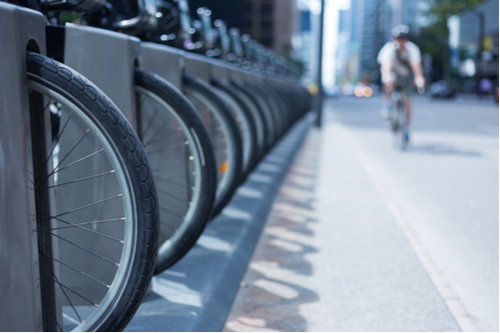 Are you looking to host a City Bike Sharing station?

Bike sharing is becoming a popular trend all over the world and USA is no exception. Bike sharing provides an alternative means of transport for reaching from point A to Point B and help fight the ills of pollution and climate change. Bike sharing is also proving quite successful in solving the last mile traveling problem through ideal placements near bus stops and other transit points.

City Bike has become the largest bike sharing system in the USA with 12,000 bikes. They operate across 60 neighborhoods in New York City through 750 stations. The company is on its way to becoming the largest bike-sharing platform in the world after a $100 million investment from Lyft. City Bike plans to grow to 40,000 bikes and expand their network to serve more riders across the nation.

One critical factor for the growth of bike sharing is the bike sharing stations. Stations are made up of docking spaces where the bikes are placed and locked. Stations also include terminals which provide information and enable riders to check in and out bikes. Terminals in the USA are mostly self-service and can be used to accept payments. The station also provides space to park the bicycles.

New York Engineers can help you design and roll out City Bike share stations across USA. Our team undertakes complete responsibility for your project, starting from inception to installation. We have created a tested and proven process which helps us scale our rollouts to meet the growing demand for bike sharing.

If you want to set up a City Bike share station, we can guide and assist you in every step of the process. Our engineers and designers create the perfect design that makes the most of the available space and surrounding area. We are fully aware of the city planning guidelines dealing with bike sharing and enable you to roll out your bike sharing station successfully.

Bike sharing stations create a social atmosphere wherever they are located. The stations attract riders day and night and act as natural conversation starters. The stations act as convenient landmarks and areas of concentrated activities giving birth to resourceful and fun public infrastructures.

Here are a few advantages you can enjoy by hosting a bike share station in or around your property :

Bike sharing stations contribute towards the sociability and amenability of the area they occupy. The stations attract not only riders, but also passerby and walkers creating a social infrastructure. The stations become ideal spots for relaxing where people can chill, read, eat, socialize, converse and skateboard.

City bike sharing stations make spaces social and encourage strangers to talk to each other.

Bike sharing stations have become popular rendezvous points across USA. The stations with their bright markings and kiosks serve as casual landmarks, enhancing the beauty and usability of the space.

Young people also seem to hang out at the stations, especially in those located in campuses and colleges.

If you take a look at the bike sharing stations in our country, you will find that they serve as ideal seating locations. People sit or lean against the station docks as they are of the perfect height. The people contribute towards natural surveillance and also enhance the beauty of the space.

Sometimes you may even find a few folks sitting on the seats of the cycles!

We noticed many people lining up near the neighborhood map in the kiosk of one of the bike sharing stations we designed. On probing further, we found that the individuals were lost and using the map to find directions to their destinations.

Bike sharing stations serve as pedestrian wayfinding signage along with helping the riders plan the route of their journeys.

Bike sharing stations create valuable public or private spaces (in case of parking lots, offices, campuses) and generate economic activity. You can expect a buzz of chatter and increased footfall where the stations are located. So if you have a store or business, you can surely benefit from the increased number of customers walking through your doors!

We have created a repeatable design and roll out process which helps us set up hundreds of bike sharing stations in a short time. We are going to give you a short overview of our process so that you know what goes into making a City Bike sharing station.

The first step of rolling out any bike share station is to determine the implications of the area. We need to assess the location, available space, placement of sidewalks, roads and a host of factors before we can decide which type of station would be ideal.

Some of the common typologies of bike sharing stations include-

1. Stations in the Street

Many stations are located in the roadbed at the same level as vehicle traffic. On-street stations are common in areas where the sidewalks aren't broad enough and pedestrian space is limited. We can place your station in standard parking lanes, concrete medians and offset/floating parking lanes.

On-street stations can be built in any place parked cars can fit. The typical stations have the bikes at 90-degrees which takes up less room than a car. If required, we can also go for a flipped station where the riders take out the bikes towards the sidewalk.

We place on-street stations in a way that they promote street safety and don't interrupt traffic. Most cities also permit bike stations in no standing and no parking zones.

Stations in the street can take up the following forms :

Stations next to the curb

We can make the stations fit existing parking lanes. Based on the space, the riders can take out the bikes towards the curb or away from it. This type of stations can also be designed to accommodate additional amenities like seating and private bike parking.

Stations next to the curb can also be flipped. This comes handy when you need to cover excess space or control vehicle traffic for road safety. We can use blocks, wheelstops, or delineators to protect the stations from moving vehicles.

Stations in the median

Stations can be placed in medians with crosswalks to connect to the sidewalk. The stations increase pedestrian space and limit the speed of moving vehicles. We can use paint, delineators and blocks to keep the station safe from vehicles.

We can design the stations to fit within existing parking lanes. The stations ensure the safety of bike lanes and create a protected space for sharing bikes. The riders take out the bike towards the curb. The station can be protected from moving vehicles by using blocks, wheelstops, or flexible delineators.

2. Stations on the Sidewalk

Another common placement of bike sharing stations is on sidewalks. We design stations on sidewalks when there is inadequate road space or restrictions on removing parking. The placement is also ideal in areas which experience heavy traffic volumes.

According to rules, stations can only be placed on the sidewalk where it is broad enough not to limit walking space for pedestrians. We maintain a minimum of 6 feet clearance from the back of the docked bike to make room for pedestrians.

We can go for various station configurations based on the width of the sidewalk. They can be located along the curb or made to face a property line or building. If stations are located next to curbside parking, we offset the orientation for allowing people to get out of their cars. We can also install back-to-back sharing stations on sidewalks to bring down the overall station length. Angled stations are helpful to reduce station length and allow maximum pedestrian clearing.

Citi Bike share stations can utilize open spaces like parks and plazas. The method is useful to exploit underutilized spaces and provide access to public spaces.

Parks are ideal places for bike sharing stations as they don't impede parking spaces or pedestrian areas. While designing stations for parks, we consider several factors like size, level of usage, nearby attractions, late night access and more.

Parks which are located near attractions like museums or zoos can benefit from stations placed near the exit or attractions. For normal parks, it's better to place the stations near the periphery for easy access.

Another ideal location for Citi Bike sharing stations is public plazas. The stations can enhance the usability of the space such as the front of buildings and transit stations. Sharing station in open plazas can have various configurations based on pedestrian walking patterns. Stations which are at sidewalk level don't need additional protection whereas stations in roadbed levels can use delineators, blocks or planters for protection.

The next step is to create the design for the bike sharing station. We create high-quality and accurate construction drawings which ensure your project is carried out without any issues. While drafting the drawings we also include other parameters such as surface finish, protective measures to keep the station safe and required technology.

For example, many stations feature solar panels to achieve self-sufficiency. Some stations use terminals or kiosks to help riders make payments and feature maps for easy navigation.

Our stations are designed in a way that they are-

The final stage of the process is the rollout of the bike sharing stations. We install the station complete with dockings, terminals and connect it with utilities like the grid and drainage. Our team also caters to the surface finish and installs the required protective features like blocks or delineators.

Our fast-paced rollout ensures that your station becomes functional at the earliest.

New York Engineers have created an innovative process which enables us to roll out hundreds of stations. Our process is repeatable and ensures a speedy completion of your project. We have a nationwide reach that allows us to roll out Citi Bike sharing stations all across the country with speed and efficiency. We can also help you determine the best location and technology for your station to offer a superior service to the riders day-in and day-out!

Get in touch with our team to discuss your City Bike sharing station rollout project.