How Is the Tesla Solar Roof Different from a Traditional Roof?

-Tesla solar shingles have a rated power of 71.67W and a 25-year warranty. They also meet wind, fire and hail resistance standards.

-A Tesla solar roof is more expensive than a traditional solar PV system. A residential solar installation has a price of around $3/watt, while the Tesla solar roof exceeds $5/watt in most cases. However, you’re also getting a new roof.

-Economically, the Tesla solar roof makes sense when its price is lower than the total cost of a new roof and solar panel system. Otherwise, traditional solar panels offer a higher ROI.

Solar power represents over 50% of the total generation capacity installed by the US in 2021, becoming the fastest growing electricity source. Most solar power systems use traditional photovoltaic modules, but solar roof shingles are becoming a viable alternative. You have most likely heard about the Tesla solar roof, which integrates PV cells as part of the roof shingles, eliminating the need for separate solar panels.

The Tesla solar roof is characterized by its “invisible” design. Tesla uses a combination of solar roof shingles and non-generating shingles, and both types look identical from the ground. This means you can generate clean electricity without altering the appearance of your roof with a solar panel array.

Get a professional solar roof design and reduce your monthly power bills.

Here we will review the main features of the Tesla solar roof, while discussing its advantages and disadvantages compared with traditional solar panels.

The basic component of the Tesla solar roof is the SR72T1 photovoltaic shingle, which has a rated power output of 71.67W. Tesla specifies the number of solar shingles according to the electricity needs of your home, and the rest of your roof is covered with non-solar shingles that look identical to the generating shingles.

High-efficiency solar panels designed for residential use normally range from around 350W to 400W, which means you need 5-6 Tesla shingles to match the output of one module. For a property that needs an 8-kW solar power system, you could use either 20 traditional panels rated at 400W each, or 112 solar shingles from Tesla.

In terms of efficiency and durability, Tesla solar shingles can be compared with the best solar panels in the market. Each shingle contains 14 monocrystalline solar cells, and Tesla has achieved the following certifications:

The Tesla solar roof can be installed with a pitch ranging from 2:12 to 24:12, which makes it suitable for a wide range of home designs. The roof tiles come with a 25-year warranty, which is comparable to the warranty offered by top solar panel manufacturers. 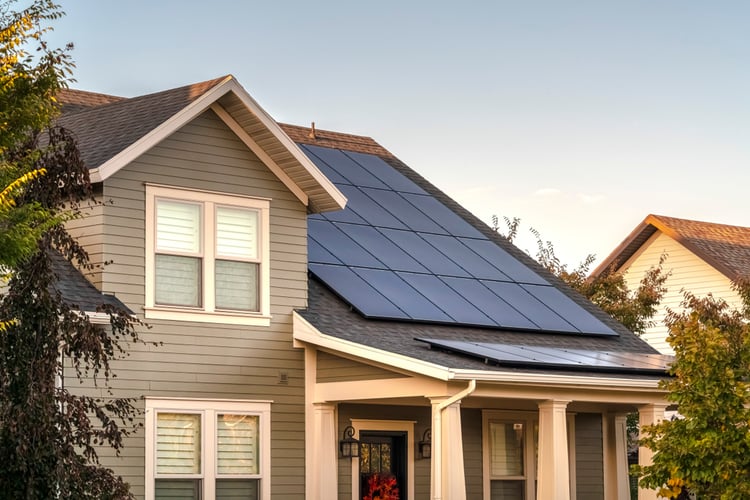 The main advantage of the Tesla solar roof is being able to combine your roof installation and solar PV system into a single system. There is no need to drill holes on your roof to set up racking for solar panels, and you deal with a single provider instead of two separate contractors.

However, since the Tesla solar roof is both a generation system and a roof structure, it has a higher price than a solar panel array of equivalent capacity.

A major limitation of the Tesla solar roof is that you can only purchase a complete roof installation, and not a partial roof upgrade. For example, if you have a 2,000-sq.ft. roof, you cannot cover 500 sq.ft. with Tesla solar shingles and leave the rest intact. You need to purchase a complete 2,000-sq.ft. roof from Tesla, and install their non-solar shingles in roof areas that will not be used for power generation.

From a financial point of view, the Tesla solar roof makes sense when you also need a new roof. This is the case if you plan to build a new home, or if you own a property that needs a roof replacement soon. On the other hand, if your current roof is relatively new and in good condition, traditional solar panels offer a better ROI than the Tesla solar roof.

Does the Tesla Solar Roof Get the 30% Federal Tax Credit?

The solar federal tax credit was recently increased from 26% to 30%, and extended for another 10 years. The Tesla solar roof qualifies for this benefit just like traditional PV modules, but there is an important restriction:

You can only claim 30% of the cost of roof components involved in solar power generation, not 30% of total costs.

Energy Storage Tax Credit: Before and After the Inflation Reduction Act

How Does the Inflation Reduction Act Benefit Solar Power?