Solar roof tiles provide an alternative to conventional solar panels. Instead of being installed on existing roofs with racking systems, solar tiles are part of the roof itself. They can be a viable option in new constructions and major renovations, since a roof installation and a solar array can be combined into a single component. Solar roof tiles are also known as solar shingles.

In New York City, solar tiles can be used to meet Local Laws 92 and 94 of 2019, which mandate sustainable roofing systems. These can be solar power systems with at least 4 kW of capacity, or green roofs. These laws apply for new roof installations, and also for modifications and expansions in existing roofs.

In existing buildings, the main disadvantage of solar shingles is having to remove parts of your roof for their installation. They are also more expensive than conventional solar panels. However, in cases where a new roof or a roof expansion was planned anyway, solar tiles may achieve a lower cost than the sum of a normal roof and solar panels.

Reduce your electricity bills and building emissions with solar power.

How Much Do Solar Roof Tiles Cost?

The cost of solar tiles varies depending on the provider, but you can expect to pay over $5,000 per kilowatt. For comparison, a residential solar panel system costs around $3,000 per kilowatt, while large commercial and industrial projects can reach costs below $1,000 per kilowatt. In terms of cost, solar shingles cannot compete with solar panels in large projects. However, they can be cost-effective in the residential sector, especially when a roof upgrade and a solar power system are being considered  for the same property. 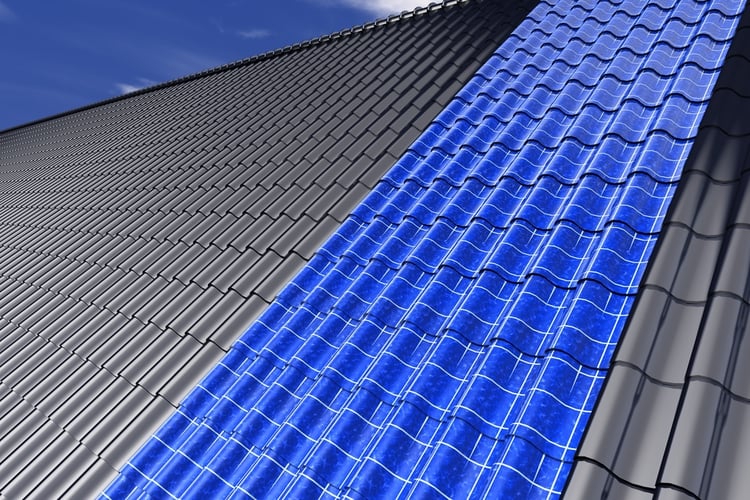 The new version of the Tesla solar roof is promising, since the company website reports an estimated price of $33,950 for a 10 kW installation. This is equivalent to $3,395 per kW, and much closer to the typical cost of a solar panel system. A 10 kW solar roof from Tesla requires an area of 2000 square feet, which leads to an installed cost slightly under $17 per sq.ft. and a power generation density of 5 watts per sq.ft.

Personal preferences also play a role when deciding between solar panels and solar shingles. Since solar roof tiles have around twice the cost of normal PV modules, their payback period is twice as long. However, both products have a typical service life of over 25 years. Long-term savings can be expected in both cases, but solar shingles need more time to reach positive cash flow.

When Are Conventional Solar Panels Recommended?

In addition to being more affordable, solar panels can concentrate more watts per square foot of capacity. High-efficiency solar panels have over 300 W of capacity within an area of 17.6 sq.ft. This means you can fit over 34 kW of generation capacity in 2000 sq.ft.

Solar panels are the recommended option if you want to maximize electricity production with the space available. On the other hand, solar shingles offer the appearance of a normal roof without panels, but the available space is used less efficiently. Using solar tiles that generate 5 watts per square foot, you need 6,800 sq. ft. to reach 34 kW of capacity.

If you are considering a roof upgrade and a solar power system, the best recommendation is getting quotes for both options: solar roof shingles, and a normal roof with solar panels. Also consider the electricity output over time - solar panels produce over three times more energy per square foot.

In New York City, LL92 and LL94 of 2019 require a minimum solar power capacity of 4 kW, or otherwise you need to install a green roof. This can be a limitation if you want to use solar shingles for a small roof, since you need around 800 sq.ft. to reach 4 kW. On the other hand, by using high-efficiency solar panels, you can fit 4 kW in less than 200 sq.ft.