How Do HVAC Systems Move Heat?

Heat movement is required for both space heating and air conditioning. Space heating systems deliver heat and air conditioning systems remove it, but the goal in both cases is reaching a suitable indoor temperature. Although heat can be transmitted across empty space by radiation, using convection and the bulk movement of a fluid is much more effective. In HVAC applications, the most common fluids used to carry heat are air, water, refrigerants and steam.

Since each substance has different properties, the heat distribution fluid used by an HVAC system determines many performance features. Also consider that different fluids may be used in the same system, with intermediate heat exchange steps.

Is your HVAC System Optimal for Your Building Needs?

The main advantage of using air to carry heat is simplicity: air is already present in the atmosphere and indoor spaces, so there is no need to use additional fluids in the HVAC system.  Air can interact directly with AC compressors, furnaces or heat pumps to adjust its temperature, and it can then be distributed using fans and ductwork.

However, air ducts require more space than the piping used by other heat-carrying fluids, and they are impractical when air must travel long vertical distances. Consider that warm air rises while cool air tends to fall below, and fan power increases dramatically if you need to move air against its natural behavior. This is neither practical nor energy efficient! 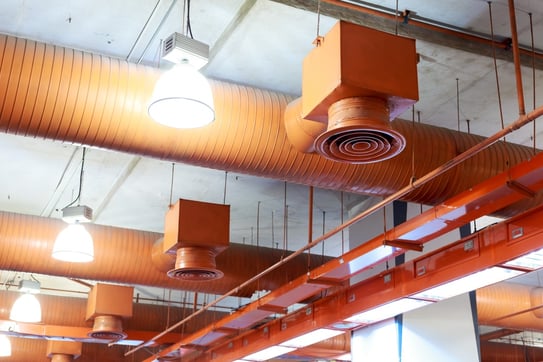 When air ducts must serve separate zones, its distribution is typically controlled with air dampers. These can adjust their position between fully open and fully closed as needed to regulate airflow, and they are controlled automatically by the thermostats in each zone.

One of the most promising system upgrades for air distribution systems is adding variable frequency drives (VFD) to the fans. Reducing fan speed is much more efficient than intermittent operation when you don’t need the full rated airflow. In the case of fractional horsepower fans, a brushless DC motor is recommended instead of a VFD, since they come with built-in speed control.

Packaged rooftop units are an example of an HVAC system that uses air as the main heat distribution and heat removal medium.

Some HVAC systems heat or cool water instead of air, and water then interacts with indoor air through fan coils. When this configuration is used, the installation is referred to as a hydronic system. Compared with air, water can hold much more heat per unit of volume, thanks to its higher specific heat and density. As a result, it is the preferred heat-carrying medium in large commercial and industrial installations: hydronic piping uses much less space than air ducts for a given heating or cooling load.

Chillers and boilers are two examples of HVAC systems that rely on water to carry heat. Indoor air can then be heated or cooled using fan-coils. Another possible configuration is using larger air-handling units (AHU) connected to an air duct system, where heat exchange occurs between the hydronic piping and the air being circulated by the AHU.

All air conditioning compressors and heat pumps use refrigerant internally, but there also HVAC systems with longer refrigerant lines connecting different pieces of equipment. Refrigerant lines are even more compact than hydronic piping, not to mention air ducts. Just like when water is used to carry heat, refrigerant flow can be controlled with the combination of valves and variable speed control for the compressor.

Ductless air conditioners and heat pumps use refrigerant lines between the condenser and evaporator units, and typically offer a very high efficiency. The concept can also be applied for multiple zones served by a single outdoor unit, using a variable refrigerant flow system (VRF). VRF systems are very efficient as well, while consolidating heating and cooling systems into a single installation.

Many buildings in New York City use steam as a heat-carrying fluid, since a significant portion of the city gets steam as a utility service from Con Edison. However, if you plan to install your own boiler, a hot water system is preferred over a steam system.

The main drawback of steam is that you can use it only for heating in most cases. The only way to achieve cooling with steam through an absorption chiller, but a conventional electric chiller is much more economic in multifamily and commercial settings. Absorption chillers are better suited for applications where heat is available at a very low cost or as a waste product of industrial activity - not when you are paying for steam as utility service.

Since steam cannot be used directly for cooling, buildings with steam radiators often have window-type or through-the-wall air conditioning units. These normally suffer from poor efficiency, so you can consider upgrading to ductless units while the heating system is retrofitted to use hot water.

HVAC systems are characterized by their variety, and each configuration brings a different set of performance features. Working with qualified HVAC consultants is recommended to identify the system configuration that works best, according to the specific needs of your building. Also keep in mind that only a registered design professional can submit HVAC designs for approval by the NYC Department of Buildings.

The 3 Things HVAC Engineering Can Help You With