Exposed Ceilings VS Suspended Ceilings: How Do They Compare?

A ceiling can be defined as an overhead interior surface that covers the upper limits of a room. Ceilings are not structural elements, but rather the finished surfaces below a roof or concrete slab. Many types of ceilings are used in buildings, but the most common are exposed and suspended ceilings.

Ceilings provide a space for mechanical, electrical and plumbing (MEP) installations. They are useful spaces for installing components like speakers, lighting fixtures, fire and smoke detectors, automatic sprinklers, etc. This article provides a comparison between exposed ceilings and suspended ceilings, describing the advantages and disadvantages of each option.

Design an optimal MEP layout according to your type of ceiling.

Exposed ceilings are also known as open ceilings or open plenums. In this type of ceiling, all the structural and MEP systems are left exposed, either with their normal colors or painted. Open ceilings are gaining popularity in almost every field: this architectural trend gives an industrial look, while making rooms more spacious thanks to the increase in height. Exposed ceilings provide several advantages: 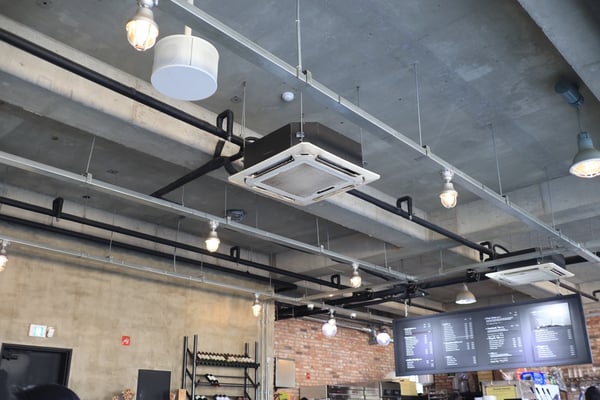 However, open ceilings require planning. Poorly designed and constructed ceilings will develop problems related to acoustics and MEP features. The following are some disadvantages of exposed ceilings:

Exposed ceilings can create an aesthetic vibe in buildings, leading to a productive and appealing space for employees and tenants. However, meticulous planning is necessary to achieve good performance and to keep working conditions pleasant. It is easy to assume than an “informal” exposed ceiling is less expensive to own than a suspended ceiling, but the reality is often quite different.

Suspended ceilings are sometimes referred to as dropped ceilings or false ceilings. As their name implies, they are suspended from the structure above, usually a roof or slab. This creates a space between the underside of the structure and the upper surface of the ceiling.

Suspended ceilings are hung from brackets fixed to the underside of the roof or slab. These brackets support a series of interlocking metal sections, forming a grid or beam system into which panels can be fitted. These tiles can be removed to access the ducts and pipes above.

The following are some of the main advantages of suspended ceilings. 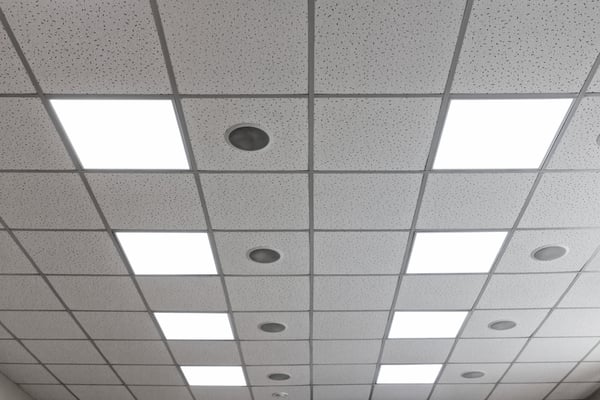 However, like in any construction decision, suspended ceilings also have their limitations. The following are some of their main disadvantages:

Suspended ceilings tend to have a higher material cost than exposed ceilings. However, those additional costs are offset in the long term by lower energy costs and easier maintenance. Renovations and reconfigurations are also simpler and less expensive.

Engineering decisions are often characterized by having several options with benefits and downsides, and this applies for ceiling selection.

An exposed ceiling uses less materials while increasing indoor space, and its industrial appearance may be favored by architects in some applications. However, exposed ceilings are more demanding in labor and maintenance, and they tend to increase HVAC expenses.

Suspended ceilings hide MEP installations, and their appearance is less important as long as they operate correctly. While the material cost of a suspended ceiling is higher, it brings labor and maintenance savings. HVAC systems also operate more efficiently, since the unwanted heat transfer across the ceiling is reduced.

What Information Do I Need to Apply for a Construction Business Loan?

4 Benefits of MEP Design Services When Repurposing a Building