Steam-based heating systems are common in New York City, especially in pre-war apartments and other old buildings. However, steam boilers and radiators tend to be inefficient due to their age and design, and conversion to hot water can yield considerable energy savings. Other than being more efficient, hot water systems also offer a faster response time than steam radiators, while having reduced maintenance costs and providing safer operation.

When upgrading a building’s heating system from steam to hot water, there are two possible approaches:

Steam-based heating systems are recommended in new constructions where steam is required for additional purposes other than heating, such as sterilization; or when waste steam is available from an industrial process or power plant. However, hot water is generally the best option for most other facilities.

Make sure your heating system conversion project is professionally designed.

How Steam Heating Was Designed in the 20th Century 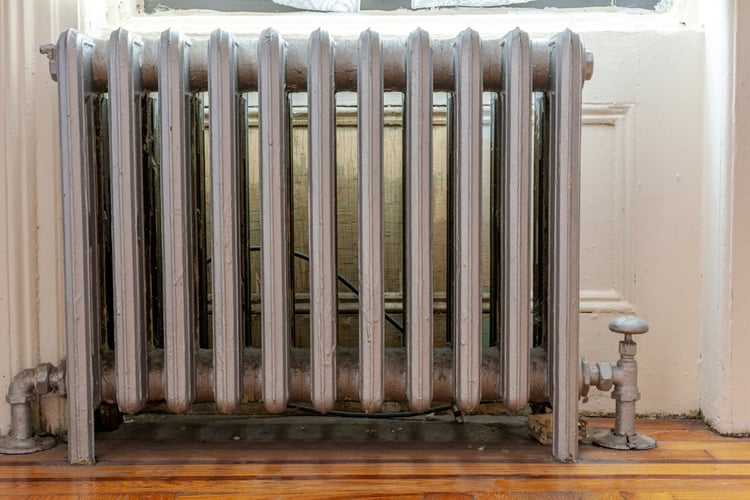 The inefficiency of steam heating comes in great part from the design practices that were common early in the 20th century: health regulations required heating systems to be sized for buildings with open windows, even during the coldest days of winter. Therefore, steam radiators tend to overheat indoor spaces, and opening windows is the only way to regulate temperature. This practice represents a significant waste of energy, since part of the heating output is dumped outdoors.

Wasteful operation is not the only drawback of the conventional steam systems found in New York buildings. They also suffer from the following limitations:

Steam was used in older heating systems for the simple reason that it rises through piping without requiring a pump, and a single pipe can supply steam and retrieve condensed water from a radiator. However, the added cost of running a steam boiler far outweighs the pumping cost associated with a modern hot water system. Steam-based heating also has a very slow response time, limiting the use of automatic controls.

Looking for plumbing design engineer for your construction? 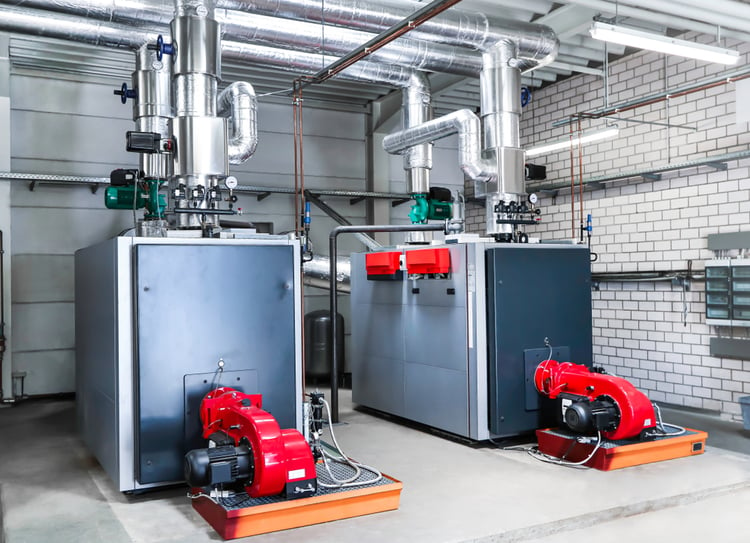 The main reason to upgrade a steam heating system to hot water is energy efficiency: for example, a heating system conversion project by the University of British Columbia achieved an efficiency increase from 60 to 85 percent. Steam-based systems also have higher maintenance expenses, which can be over 10 times higher than those of an equivalent hot water system.

Hot water systems also offer increased efficiency because they have faster response times and are easier to control. Variables such as water temperature and flow can be controlled with a precision that is simply not possible with steam, optimizing energy consumption and reducing energy expenses.

As previously mentioned, steam heating systems are often oversized because they were designed to meet outdated health standards. The first step before switching from steam to hot water is to calculate the heating load properly.

Using “rules of thumb” can be tempting because they are simple, but they often result in an oversized heating system, partially defeating the purpose of the upgrade. Other than being inefficient, oversized boilers run in shorter cycles, wearing down their components and reducing their service life. This increases maintenance expenses and shortens the time between boiler replacements. The boiler is almost always downsized when a steam to hot water conversion is carried out, and getting in touch with a qualified design engineer or firm is highly recommended to get a properly-sized installation.

Although existing steam boilers can be modified to supply hot water, upgrading the unit is generally a better idea: 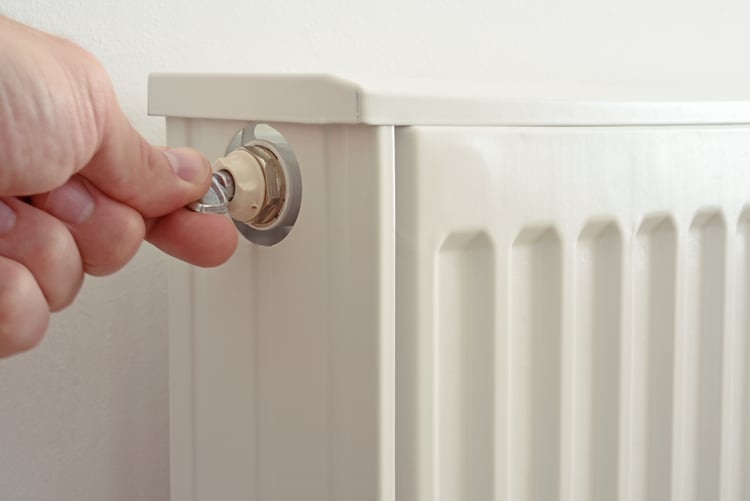 When upgrading from steam to hot water, it is important to determine if the radiators can be reused. Some radiators are designed exclusively for steam, and modifying them is generally expensive and not recommended; in these cases, the best option is to use a different heat delivery medium, such as a fan coil.

Although radiators should be checked by a qualified professional, there is one way to immediately determine if they are exclusive for steam: if individual radiator sections are not connected with a pipe across the top, hot water can’t be used.

The radiator piping configuration is also important when deciding whether to reuse them or not. As implied by their name, single-pipe systems supply steam and retrieve condensed water through the same pipe; while two-pipe systems have a separate pipe for each function. Two pipes are mandatory for hot water systems, so the upgrade becomes more complex if the existing steam installation only uses one per radiator. Sometimes even two-pipe systems require the return pipes to be upgraded; if they were designed for a small flow of condensed water, they may be unable to handle the full flow of a hot water system.

Keep in mind that piping will be subject to a very different set of operating conditions once the installation is upgraded to hot water:

Steam piping has a series of fixtures and accessories that are not necessary when hot water is used, and they only cause energy to be wasted as a pressure drop. Any components that are no longer necessary after the system is upgraded to hot water should be removed, and special attention should be given to thermostatic steam traps, which can greatly hinder the flow of hot water.

Replacing a steam heating system with a brand new hot water installation is feasible, but the cost can be prohibitive in existing facilities due to the need to open walls and replace piping. However, if a building will undergo a major renovation, it represents an excellent change to remake the heating system completely.

This is only cost-effective when a major renovation is carried out. For example, demolishing floors and walls only to install new piping is rarely justified in terms of cost and benefit.

When Are Steam Systems Recommended?

In most residential and commercial settings, hot water is the clear winner over steam in terms of upfront cost, convenience and efficiency. However, there are specific applications where a steam-based system is better suited.

Applications Where Sterilization is Needed 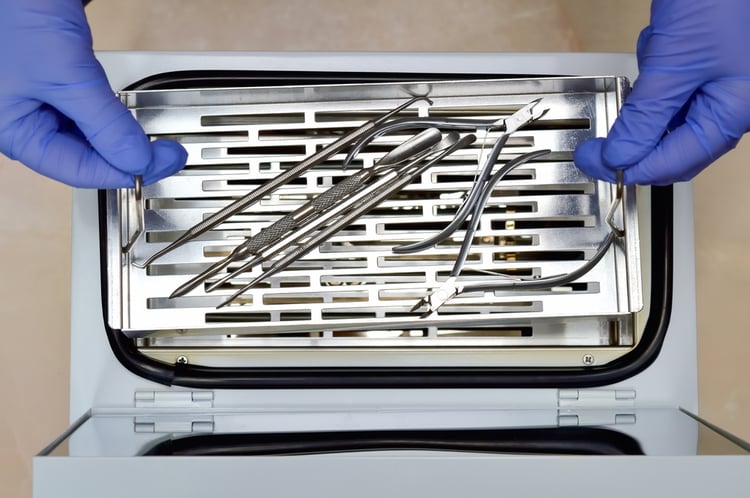 Steam is often used for equipment sterilization in applications such as healthcare or food processing, and the most cost-effective option is to use the same boiler for sterilization and heating. Another advantage of steam is that any bacteria in condensed water are immediately killed during vaporization.

In applications where sterilization is required, using hot water for space heating would require the use of two separate boilers, which comes at an extremely high upfront cost. Hence, steam-based heating is cost-effective.

Steam is often available as a waste product from industrial and energy generation processes, and it essentially provides a free energy input for heating systems. With an absorption chiller, it is also possible to use steam for air conditioning and refrigeration, but it represents a sizable investment that is only justified when free or low-cost steam is available.

Steam is a cost-effective heating medium when it is available as a process waste or where it can be used for other applications, but hot water offers greater efficiency, safety and convenience in residential and commercial applications. If you are considering a heating system conversion, getting in touch with qualified professionals is highly recommended, so you can determine which system components can be reused and which modifications will be required. Alternatively, if a major renovation will be carried out at your facility, consider changing the heating system completely to maximize efficiency.