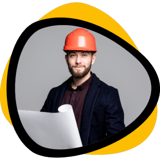 Our experts will analyze the documents uploaded by you to design fire alarm system.

We send you an optimized fire alarm system plans within 2 weeks per floor.

Get Your Fire Alarm Design In 3 Easy Steps

All design will be done as per the International Building Code(IBC) and National Fire Protection Association (NFPA).

Secure Your Building With

Our systems are equipped to detect heat, smoke, and carbon monoxide, ensuring you'll aways be aware of a problem in your building.

Our rapid design process is flexible and agile, and allows us to have turnaround times 50% faster than anyone else in the industry.

You can never be too prepared for an emergency. Our systems call the fire department for you, so they'll arrive as soon as possible. 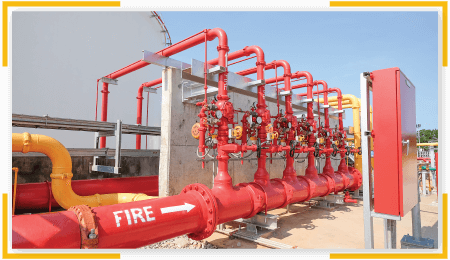 Fire alarms have a very important role in buildings, since they warn occupants when a fire is detected. Modern fire alarm systems can also alert the local fire department, ensuring a quick response. They can also be configured notify building managers who are away from the building, and other key personnel.

When building systems malfunction, they normally cause disruption for occupants. For example, an HVAC issue can make indoor temperatures uncomfortable. However, when fire protection measures fail, human lives and property are at stake. For this reason, there is zero tolerance for failure when designing and installing a fire alarm system. Proper maintenance is also important to ensure ongoing protection.

Depending on the type of building and local building codes, some fire protection measures may be optional. However, building owners should consider fire alarms even when they are not required in a specific project, due to the protection they offer.

Even if a building is never affected by fire in its entire service life, fire alarms and other protection measures bring several benefits. For example, insurance companies may offer better plans and lower premiums when a building is well protected against fire. In buildings with commercial spaces for rent, reliable fire protection can help convince tenants to sign a contract.

Fire alarms are normally activated by heat or smoke detectors. However, they can also be activated with manual controls, or with flow sensors in fire sprinkler systems. There are two main ways in which a fire alarm can malfunction:

A false alarm is disruptive for a building, since it can cause an unnecessary evacuation and suspension of activities. To prevent false alarms during installation, fire protection engineers recommend installing all other system components before the communication lines. Frequent false alarms must be prevented at all costs, since they can confuse occupants. When there is a real fire incident, occupants may not evacuate believing it’s another false alarm.

Not activating during a fire is a much more serious issue in alarm systems: this leaves less time to evacuate, and the fire department is not notified immediately. A malfunctioning fire alarm system can also have legal consequences, and insurance coverage may be voided.

In addition to being reliable, a fire alarm system must offer durability. Consider that buildings last for decades, and fire protection systems should be equally durable to minimize repairs and part replacements.

Since fire alarms have a critical function in buildings, they are subject to stringent design standards. While this increases the complexity and installation cost of fire alarm systems, it is necessary to ensure they will always work properly.

The industry standard for fire alarms is the NFPA 72 National Fire Alarm and Signaling Code, and there are also design requirements in the NFPA 101 Life Safety Code. These standards were developed by the National Fire Protection Association, which also provides design requirements for sprinkler systems (NFPA 13), and other fire protection measures and building systems.

Local governments use NFPA standards as reference when establishing the fire protection requirements in their building codes. Building owners with properties in many cities must be aware that there are code differences. Working with a qualified engineering firm is important to make sure that local requirements are met.

In addition to meeting NFPA standards, fire alarm systems must also use components that are listed by Underwriters Laboratories (UL) or a similar certification laboratory. If the connections and devices of a fire alarm system create a fire risk themselves, they defeat their own purpose.

The following recommendations can improve the reliability of fire alarm systems in the long run:

In New York City, retroactive fire protection requirements are mandated with Local Laws. An example is Local Law 26 of 2004, which many fire sprinklers mandatory for many buildings.

Understanding the Basics of a Fire Alarm System

As previously mentioned, fire alarm systems are designed to detect fire and smoke, and this activates signaling devices like horns and strobe lights. However, fire alarms can also activate with other inputs:

Fire alarm systems can also alert owners and facility managers when they are away from the building. Most importantly, fire alarms can alert the local fire department, ensuring a quick response. Automatic sprinklers are recommended to complement fire alarms, even when not required, since they can extinguish many fires on their own.

A fire alarm system has three possible states: normal, alarm and trouble. The current state is displayed permanently by the control panel.

Open circuits can be detected with an end-of-line resistor. The resistor is connected at several points between the last device and the control panel, while voltage and current are measured. The fault location can be pinpointed based on how voltage and current respond at different connection points.

The main components of a fire alarm system are the following:

Initiating devices activate the alarm system, as their name implies. These devices include smoke detectors, manual pull stations and sprinkler flow sensors. They typically use 2-wire or 4-wire circuits, and a 24 VDC power source. These devices are divided into zones, where each zone is connected to the control panel with each own circuit.

Initiating devices are connected in parallel, with ungrounded wires that are isolated from all metallic raceways. The connection polarity is critical for proper functioning, since they are direct current devices.

Indicating appliances complement the function of initiating devices, announcing that the alarm system has activated. Some examples of indicating appliances are horns, strobe lights, chimes and bells. Depending on the application, these devices may be weatherproof, or rated for hazardous locations.

The control panel contains the user interface, branch circuit connections, and all electronic components needed to operate the fire alarm system. Each alarm zone has a separate circuit board, allowing modifications and maintenance without affecting other zones. The control panel displays the system state, and a touchpad is provided for user inputs.

Fire protection engineers recommend installing the control panel in a staffed or centralized location. Some viable options are the building security headquarters, the telephone switchboard room, or a maintenance office. The control panel monitors the voltage and current on all zone circuits, detecting possible issues as soon as they occur.

Information technologies have made fire alarms more reliable. Older fire alarm systems can only monitor general zones, while newer installations have addressable components. For example, older installations only indicate the zone where a fire occurs, while modern systems can identify the exact fire or smoke sensor that activated the fire alarm.

Existing fire alarm systems can be upgraded without a complete replacement. Normally, they only need additional wiring and communication features. The circuit boards on older control panels will likely need a replacement to use addressable components.

In the NFPA 72 standard, addressable circuits are designated as signaling line circuits (SLC). Some equipment suppliers produce SLCs that support dozens of devices. However, fire protection engineers don’t recommend using SLCs at full capacity, leaving space for additions or modifications. Having too many devices on the same circuit is not recommended either, since a fault can disable all of them simultaneously.

Signaling line circuits are classified into Class A and Class B, based on how they are wired:

Thanks to their redundancy, Class A circuits offer better protection than Class B circuits. Wiring and installation costs are increased with Class A circuits, but in return the fire alarm system becomes more reliable.

Oversizing SLCs is not recommended by fire protection engineers. Larger wires increase the capacitance of an SLC, causing signal distortion and slower communication. On the other hand, the notification appliance circuits (NAC) that power horns and other indicating appliances can be oversized with no problem.

Fire alarms can also be designed as part of an emergency communication system (ECS). Unlike a conventional fire alarm system, which only detects fire, an ECS notifies emergency conditions of many types (including fire).