Medical gas systems are commonly color-coded to identify their contents, but considering that coding systems and requirements (such as those for bottled gas) vary by jurisdiction, the text or labeling is the most reliable source to accurately identify the gas. 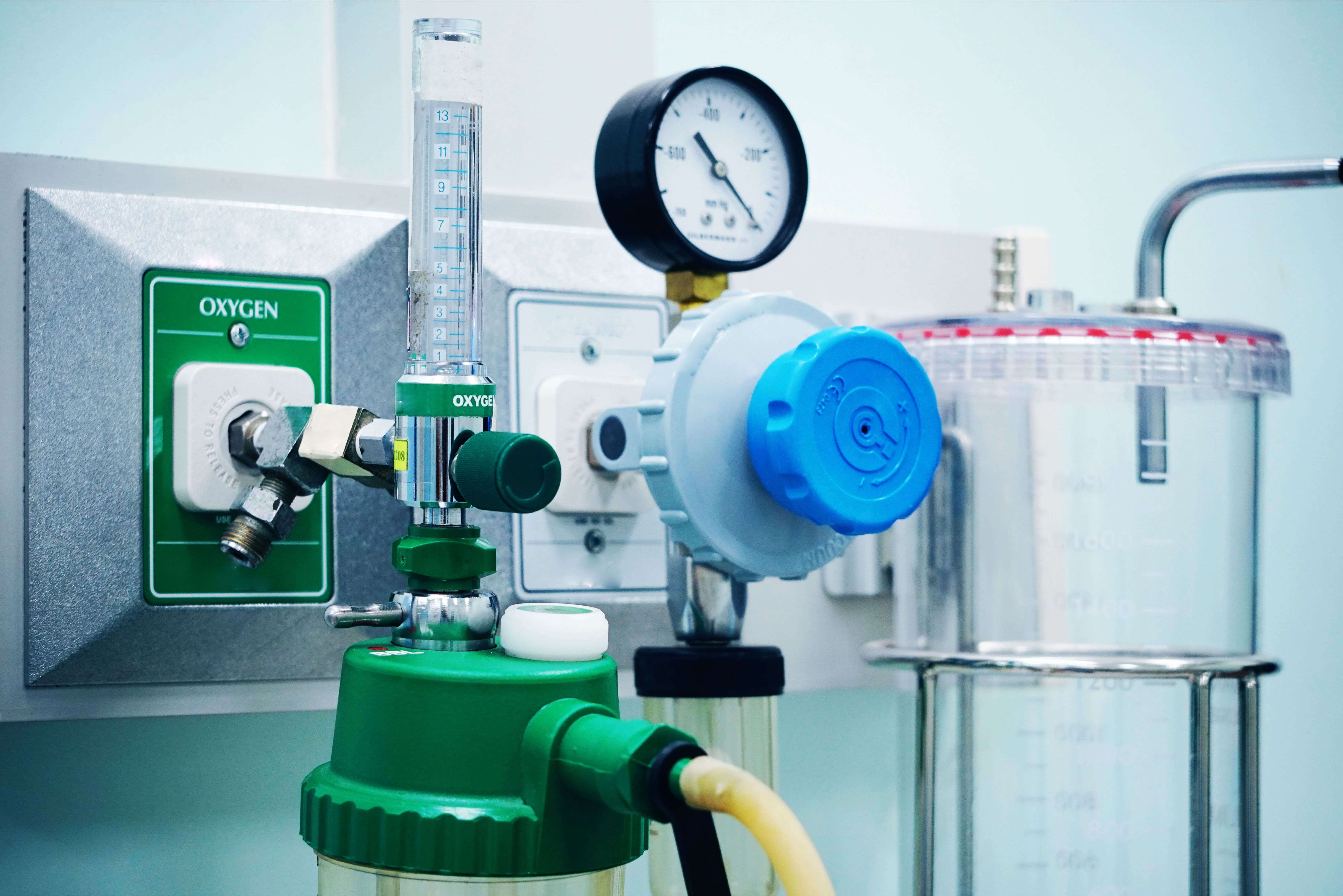 Hospitals and other healthcare facilities utilize medical gas supply systems to provide various parts of their facility with specialized gases and gas mixtures.

Medical gas systems are commonly color-coded to identify their contents, but considering that coding systems and requirements (such as those for bottled gas) vary by jurisdiction, the text or labeling is the most reliable source to accurately identify the gas. Emergency shut-off valves, or zone valves, are often installed in order to stop gas from flowing into an area during servicing or in the event of a fire or substantial leak. Valves may be positioned at department entrances, with emergency pull-out windows provided for access.

Oxygen is used for patients who require supplemental oxygenation due to hypoxemia and hypoxia (insufficient oxygen in the blood). This system most often consists of a large storage system of liquid oxygen. It is then evaporated into a concentrated oxygen supply for ease of use at point of delivery. For medical centers or hospitals with a low patient capacity, oxygen is supplied by multiple standard cylinders, as opposed to evaporated liquid oxygen.

Nitrous Oxide, or laughing gas, is used as an analgesic and an anesthetic for pre-operative procedures. Nitrous oxide is generally delivered to the hospital in standard tanks and is then supplied through the building’s medical gas system.

Nitrogen is often used to power up surgical equipment during various procedures and to measure a person’s response to a simulated aircraft cabin environment in preflight lung testing. This is known as hypoxic challenge testing. Nitrogen can also be used as a cryogen to freeze and preserve tissue, blood, and other biological specimens. It is also used to freeze and destroy diseased tissue collected in dermatology and cryosurgery.

Carbon Dioxide is generally used to suspend or inflate various tissues. It is also frequently used in laser surgeries. Most commonly, carbon dioxide is used in abdominal and thoracic surgeries wherein the surgeon may need to move various organs to get to one particular area of the body. Carbon dioxide is also sometimes combined with oxygen or air for respiratory simulation and treatment of various respiratory disorders.

Medical Air is supplied by a specialized air compressor to patient care areas. Clean outside air is pressurized and brought inside to the patient. Medical air should never be used

Medical air is used extensively in the PICU, NICU, and ICU areas, and also with pulmonary nebulizers to reduce the risk of excess oxygen in the lungs or other body tissues, during mechanical ventilation or surgical procedures.

Helium, or Heliox, is often used to treat fixed partial upper airway obstructions or increased air resistance help patients breathe easier. It is also used in a liquefied form to help MRI machines to reach a superconducting state, which allows the MRI to produce high-resolution body images without exposing the patient to radiation.

Carbon Monoxide is only used in very trace amounts as an ingredient in lung diffusion testing. This test helps medical staff determine how well a patient’s lungs are exchanging gases.

In addition to these main gases, there are a number of medical gas mixtures that are often used for patient diagnostics such as lung function or blood-gas analysis. Test gases are also used to calibrate and maintain medical devices that are employed in the delivery of anesthetic gases. Medical gases are also used in a laboratory environment where bacterial cultures may be grown in controlled aerobic or anaerobic incubator atmospheres.

It is necessary to establish a monitoring system in order to maintain a stable supply of medical gases. The monitoring system should trace the gas flow from the source, following through the piping, and to the various hospital outlets that use the gas. These systems should show the amount of gas remaining in the different tanks as well as the operating condition of the supply station and the gas pressure applied to each area where the gas is in use.

Additionally, the medical gas outlet that is used by medical staff should be designed so that it is impossible to allow a cross-connection to a different medical gas (e.g., connecting a hypoxic patient to a carbon-dioxide supply). Systems have been developed that utilize pin patterns that will only fit into the correct female connector, as well as bright colors respectively designed to the particular kind of gas.

Medical gas is disposed of via vacuum equipment, which is generally supplied by various vacuum pump systems that exhaust to the atmosphere. Anesthesia gas waste uses the same vacuum pump as the medical vacuum system, but may be a separate line from the source; however, the line can be combined with the primary medical vacuum line.

Planning for Medical Gas in Your Project

If you find that you need medical gas piping in your project, hire the correct professional to help you in the design phase. Retain an expert engineer that will give you the recommendations and design details you need to complete your project. Medical gas piping requires extra layers of permits, inspections, and approvals due to the sensitive nature of the piping. Having a good design from the beginning will alleviate future headaches.