What Is the Chicago Renewable Energy Challenge?

With its continuous effort to use more renewable energy, Chicago has become one of the greenest cities in the USA. The city is committed with the goals of the Paris Agreement through the Chicago Climate Charter, and the local government unveiled a plan to power all municipal buildings only with renewable energy by the year 2025.

Chicago has been ranked twice as the greenest city in the US by the Green Building Adoption Index, and it holds the LEED for Cities Platinum Certification from the US Green Building Council. Chicago is also the first major city to get the ENERGY STAR Partner of the Year Award.

On November 16, 2018, the city launched its latest clean energy program: the Chicago Renewable Energy Challenge. Its main purpose is motivating the private sector to join the municipal government in its renewable energy goals, and there are two main guidelines for organizations who participate in the challenge:

Participants in the challenge can set the target for both owned and leased properties, and large organizations with multiple buildings can select one or more properties to participate. Once a participant reaches the target, it is designated as a “Chicago Renewable Energy Leader”.

There are many ways in which a company can use more renewable energy to power its operations. In the Chicago Renewable Energy Challenge, the following options are allowed:

The Chicago Renewable Energy Challenge only allows limited use of RECs, since they do not represent actual electricity consumed by the building. Instead, the participant is “purchasing” credit for clean energy generation achieved by someone else.

Which Electricity Sources Are Considered Renewable in Chicago? 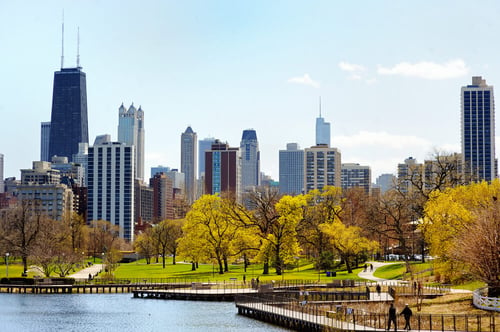 The Chicago Renewable Energy Challenge has seven founding members, which include global organizations and academic institutions:

When all seven founding members reach 100% renewable energy, they will be reducing their consumption from conventional sources by 184.5 million kWh per year - enough electricity to power 20,000 homes. The environmental benefit is equivalent to removing 30,000 cars from circulation, or saving 300,000 barrels of oil.

The Chicago Renewable Energy Challenge was modeled after another program called Retrofit Chicago, launched in 2012. In this program, participants aim for a 20% reduction in building energy use, and there are 90 participating properties with a floor area of 57 million sq. ft. So far, they have achieved an average reduction of 17%, saving $11 million per year.

Keep in mind that every building has unique features, and any upgrades that improve energy performance must be adequate for the property. The best approach is getting an energy audit as a first step, to identify the energy efficiency measures and renewable technologies that yield the highest return on investment.

How a Project Plan Simplifies the Construction Process