In commercial buildings, HVAC loads normally represent the highest energy expense. Geographic location plays a significant role: buildings far to the north or south of the world typically have high heating expenses, while those located in the tropics may require air conditioning all year long.

Are you planning a commercial real estate project? Get a professional HVAC design.

Packaged rooftop units (RTUs) normally include a condenser for air conditioning, and a gas or electric boiler for space heating. In climates where the unit must provide air conditioning with low outdoor humidity, it is also possible to add an economizer, which reduces the cooling load on the condenser. In all modes of operation, fans are used to blow air into a duct system that distributes it among the separate indoor zones.

Traditional VAV systems suffer a drastic reduction in energy efficiency when subject to part load conditions: if all building zones are at partial load with their dampers half-closed, duct pressure increases and the system may become noisy. In addition, the extra pressure represents wasted fan power. However, it is possible to achieve excellent results through the use of automation and variable frequency drives:

There can be considerable savings on fan power when speed is controlled through a variable frequency drive. In general, fan power is proportional to speed cubed – a fan running at 90% speed only consumes around 73% of the energy it would consume at full speed. An added benefit of speed control is that noise is drastically reduced.

VAV systems with packaged rooftop units are practical in facilities that have a large rooftop area in proportion to their indoor floor space, given that air is the main medium used to transport heat. These systems are not practical in multi-story buildings due to the limited rooftop area and the long vertical distances involved; systems based on water-cooled chillers or water-source heat pumps are preferred in these applications.

2)Chiller with Cooling Tower and Boiler 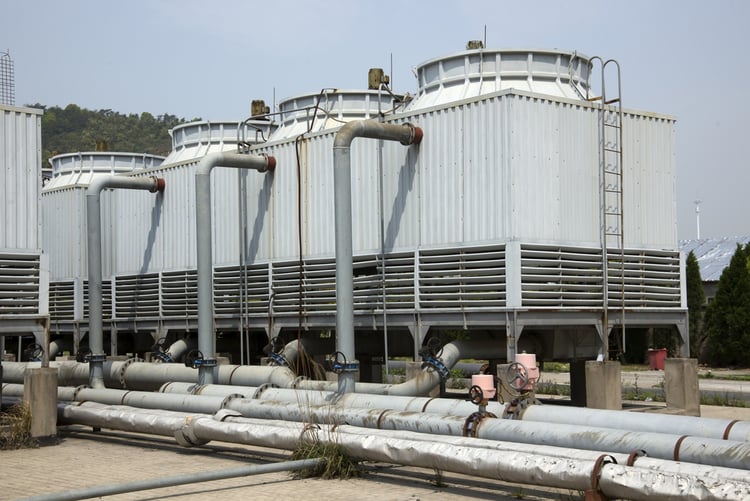 These systems use water as a medium to deliver or extract heat, and water circuits pass through air-handling units (AHUs) that provide the required airflow for each building zone.

In both cases, heat is exchanged between the circulating water and the indoor air at the AHUs. If the chiller and boiler share a water circuit (two-pipe system), the entire building must operate in either heating or cooling mode; however, when there is a separate water circuit for each mode of operation (four-pipe system), simultaneous heating and cooling can be provided to different zones. Of course, a four-pipe system is more expensive because piping and accessories are essentially doubled.

Just like in the case of VAV systems, it is possible to achieve considerable savings with control and automation:

Chiller-based systems typically offer a higher efficiency than VAV systems, and are also more practical for multi-story buildings: rather than having several packaged rooftop units, it is possible to consolidate the system into a single chiller and cooling tower, and only the cooling tower has to be located outdoors or on the rooftop. 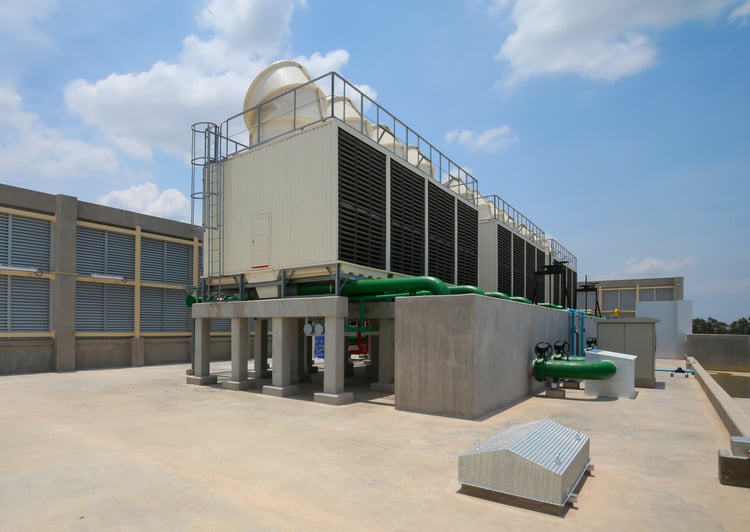 Commercial HVAC systems based on water-source heat pumps tend to be the superior choice in terms of versatility and energy efficiency. Heat pumps are based on the refrigeration cycle, just like air conditioners, but they offer reversible operation; when multiple heat pumps are used to serve separate areas of a commercial building, they can switch between cooling and heating modes as needed.

Just like in the two previous scenarios, it is possible to make the system even more efficient by adding speed control to all pumps and fans used. Heat pumps are among the most efficient heating and cooling systems in the market: they can match or surpass the efficiency of a chiller in cooling mode, and in most cases they can provide space heating with less than 40% of the energy consumption of a resistance heater.

The need to install a dedicated heat pump for each building zone drives up the cost of these systems, but this is compensated in the long term thanks to the superior energy efficiency achieved. For example, if there is a moment when cooling and heating loads are equal, this system can operate with both the boiler and cooling tower deactivated.

One of the most important design choices in a commercial building is HVAC configuration, since this system represents a significant portion of ownership costs in the long term. Building layout is an important consideration: low-height facilities with ample rooftop areas tend to favor packaged rooftop units with VAV systems, while multi-story buildings tend to favor the use of chillers or water-source heat pumps.

Of course, there are viable energy efficiency enhancements that can be deployed in all cases. Modulating the speed of compressors, pumps and fans is more energy-efficient than cycling these pieces of equipment on and off, and it also contributes towards a longer service life and reduced maintenance expenses.