How Buildings Can Benefit from Heat Storage Systems

Energy storage has promising applications in buildings and clean power generation. Although the media has recently focused on lithium-ion batteries, there are other viable forms of energy storage, and one example is heat storage. Since space heating and hot water represent a large portion of energy consumption in US buildings, the opportunities to use heat storage are abundant.

A heat storage system can be as simple as a water tank with effective insulation, since water can hold large amounts of heat in a compact volume. When one cubic meter of water reduces its temperature by 10°C, it releases 41,870 kilojoules of heat - equivalent to 39,685 BTU. Hot water can be used directly, or it can provide space heating by circulating through air handlers or radiant heating pipes.

Design an optimal heating system for your building project.

When heating systems use natural gas or fuel oil, their operating cost is unaffected by the time of use - heating 100 gallons of water has the same cost at any hour. However, combustion heating produces local emissions, and electric heating with clean power is among the proposed alternatives to reduce pollution from buildings. 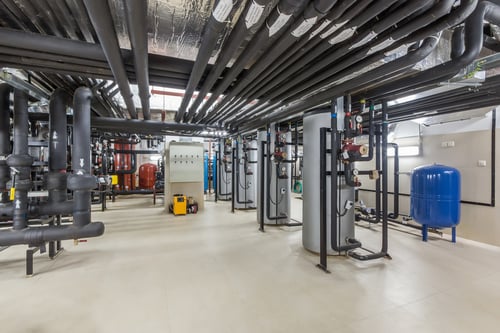 Electric heating is sensitive to the time of use, unlike combustion heating, and its usage can become very expensive when not managed properly:

Space heating and domestic hot water have a minimal environmental impact when they use heat pumps driven by low-cost electricity from wind turbines and solar farms. The main disadvantage of this setup is the variable output of solar and wind power systems, but hot water storage can balance the power supply and the heating demand.

Since electricity is much easier to transport than water, the ideal location for hot water storage is close to the point of use. When a hot water tank is far from the point of use, pumping can cause a significant increase in operating costs. Also consider that longer piping comes with increased heat losses.

Distributed heat storage is a viable enhancement for space heating and domestic hot water systems. However, heat storage has also been tested at the utility scale, along with concentrated solar power (CSP).

Unlike a photovoltaic array, which uses solar modules, a CSP installation concentrates sunlight with mirrors. The intense localized heating is enough to drive a steam turbine and generator:

With this configuration, the molten salt is stored in refractory containers, where it holds heat for extended periods. This way, the system can continue producing steam for the turbines even when there is no sunshine. While photovoltaic arrays offer a lower electricity cost than CSP systems with molten salt, they cannot deliver electric power on demand.

Unlike photovoltaic arrays, CSP stations require a large scale to be economically viable. For a building owner who wants to maximize the use of renewable energy, a solar PV system with energy storage offers the flexibility for reduced scale. CSP stations for self-generation are possible for users reaching the scale of megawatts - large manufacturing parks would be viable candidates.

This concept still relatively new, and has only been deployed in a few power plants around the world. The first commercial application of CSP with heat storage in the US was the 110 MW Crescent Dunes plant in Nevada.

Heat storage allows an increased use of clean power in space heating and domestic hot water applications, which have traditionally relied on combustion. Hot water storage can achieve synergy with heat pumps, which deliver between 2 and 6 kWh of heat for every kWh of electricity consumed. Although heat storage can also be used with conventional resistance heaters, the system becomes inefficient and expensive to operate.

How Are Water Towers Used?

How Does the Defrost Cycle Work in VRF Systems During Winter?