As we discussed in a previous article, offshore wind power has massive potential in the northeastern states. New York is committed to 50% renewable generation by 2030, and offshore wind power will contribute with 2,400 MW of planned capacity. The corresponding projects will be developed under the oversight of the NY State Public Service Commission.

NYSERDA will be receiving bids for the first 800 MW of offshore wind power by the end of 2018, announcing the winner during the second quarter of 2019. The process will be carried out in collaboration with the Long Island Power Authority and New York Power Authority, and a second solicitation is also planned for 2019.

Wind power has the potential to become a thriving industry in the state of New York, drawing an estimated investment of $6 billion over the following decades. To complement the growth of this industry, NYSERDA will conduct the following efforts:

Find out how your building can benefit from renewable energy.

The most evident benefit of wind power is delivering low-cost electricity with zero greenhouse gas emissions. Offshore wind power can contribute to both the renewable energy target and the emissions reduction target set by New York State.

The 2,400 MW of offshore wind power will deliver enough electricity for 1.2 million New York households. These projects have the potential to create 5,000 new jobs in manufacturing, construction, operation and maintenance, where an estimated 2,000 jobs will be permanent. NYSERDA will include labor agreements and environmental requirements in contracts for offshore wind power projects, ensuring they are developed with social and environmental responsibility. 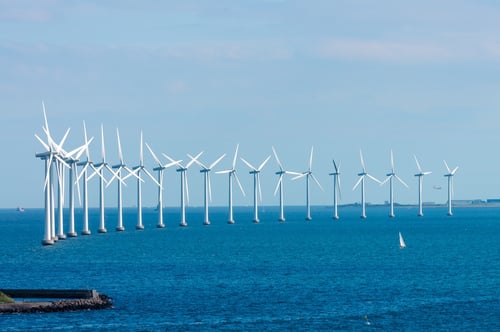 On Monday, June 23, NYSERDA held a conference to provide additional information and clarify doubts about the first 800 MW of offshore wind power. When analyzing the bids, they will focus 70% on price, 20% on economic benefits and 10% on project viability.

In addition to selling electricity, offshore wind power developers will accumulate Offshore Wind Renewable Energy Certificates (OREC). Utility companies subject to the renewable energy target in the RPS law will be able to purchase ORECs, and this will count as credit towards the 50% goal.

NYSERDA will be serving as the OREC market, purchasing them from offshore wind power companies and reselling them to electric companies in the state.

New York’s wind power initiative will contribute to lower electricity prices, reduced emissions and job creation. Consider that there is already a successful solar incentive program called NY-Sun, and there are plans for large-scale deployment of energy storage systems. While solar and wind power contribute to making electricity more affordable, energy storage compensates for the variability of sunshine and wind.

3 Ways to Increase the ROI of a Commercial Solar Array