How Does NYC Compare with Other US Cities in Energy Efficiency?

New York City is characterized by having some of the most demanding building codes in the world, and this includes the NYC Energy Conservation Code. As a result, NYC has taken a leadership role among US cities in energy efficiency and renewable energy. Thanks to ongoing efforts from the municipal government and private developers, NYC is among the top 5 cities in two of the most prestigious energy efficiency rankings in the US:

The ACEEE Scorecard analyzes US cities based on 5 main aspects: Local government, community-wide initiatives, buildings policies, energy & water utilities, and transportation. On the other hand, the ENERGY STAR Top Cities ranking is based on the number of certified buildings in each city.

New York City is in 2nd place in the latest edition of the ACEEE Scorecard, with a score of 79.5/100. Only Boston achieved a higher score of 84.5, taking the 1st place. On the other hand, NYC is in 5th place of the ENERGY STAR Top Cities ranking, but it has the highest certified floor area and cumulative savings of all cities in the list.

Improve the energy efficiency of your building.

Overview of the ACEEE Scorecard for New York City

As explained above, the ACEEE score is based on five categories, and the score breakdown for NYC in the latest edition is the following:

There are many prominent programs from the NYC government that target energy efficiency and environmental sustainability. One of the most ambitious in scale is the Greener, Greater Buildings Program (GGBP), which introduced a set of four laws:


The NYC energy code is very stringent in its 2016 edition: requirements for commercial buildings exceed the ASHRAE 90.1-2013 standard, while requirements for residential buildings exceed the 2015 International Energy Conservation Code. Also, since the energy code is reviewed and updated at three-year intervals, a new and more demanding version will be released in 2019.

Starting from 2020, the benchmarking data collected under LL84 will be used to assign an energy grade to all buildings larger than 25,000 sq.ft. Local Law 33 mandates that energy grades and ENERGY STAR scores be published where they can be easily seen by visitors or tenants.

New York City also stands out for its commitment to reduce emissions by 80% by by 2050, with respect to 2005.  As an effort towards this goal, the NYC government made a public commitment to invest $1 billion in municipal buildings by 2025, focusing on those with an energy usage above 5 million BTU per year. 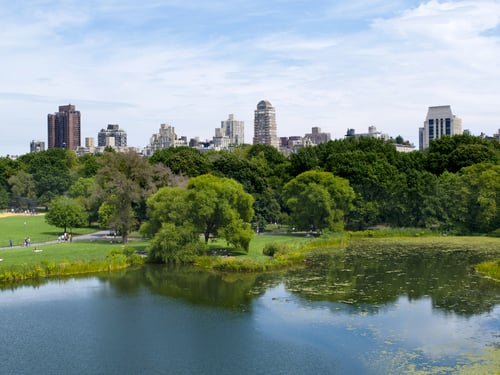 Other relevant programs from the NYC government include a large-scale LED retrofit for more than 250,000 street lights, and mandatory LEED Gold certification for any buildings that receive more than $2 million in public funding.

Con Edison has also played a key role in energy efficiency, thanks to its incentive programs for residential and commercial users. Building upgrades that improve energy efficiency may be eligible for rebates, which increase the financial return of projects by reducing their upfront cost. Professional engineering services are strongly recommended before any energy efficiency upgrade, to ensure that the project is eligible for incentives.

How NYC Ranks Among the ENERGY STAR 2018 Top Cities

In the latest ranking published by the US Environmental Protection Agency, NYC has 434 certified buildings, with a total floor area of 206.2 million sq.ft. and cumulative savings of $261 million. The only cities with more ENERGY STAR Certified buildings than NYC are the following:

NYC is consistently ranked among the most energy efficient cities in the US, occupying the 2nd place in the ACEEE ranking and the 5th place in the ENERGY STAR ranking. Solid policies towards energy efficiency have played an important role, and the private sector has shown a positive response.

Energy efficiency in buildings provides benefits to many different parties. Developers and tenants benefit from lower energy expenses, and efficient buildings can be served more easily by utility companies. Also, the image of a green city attracts both investment and professional talent.