- The US solar industry is currently facing a unique situation: at the same time, there are considerable threats and opportunities in the short term.

- Supply chains are currently disrupted around the world, and this is having an impact on the solar industry. The SEIA has forecast that solar installations could slow down by 25% in 2022.

- At the same time, solar developers have faced uncertain policies for imported components. There was a recent petition to impose anti-dumping and countervailing duties (AD/CVD) on solar modules from Malaysia, Thailand and Vietnam (now dismissed).

- There is also a Withhold Release Order (WRO) for solar modules from Hoshine Silicon Industry and its subsidiaries.

- However, the US solar industry could also receive a major incentive in the near future. The Build Back Better Act increases the solar Investment Tax Credit to 30% again, while extending until 2026.

- If approved, the tax credit extension could boost solar installations by 31%.

If you follow our blog posts and renewable energy news in general, you have probably read about the recent growth of solar power in the US. Photovoltaic technology represents over 50% of the generation capacity added in 2021, and the US surpassed 100 gigawatts of solar capacity during the first months of the year. If this trend continues during the next five years, the installed capacity could reach 250 - 300 GW by the end of 2026, according to projections from Wood Mackenzie and the Solar Energy Industries Association.

Considering solar power for your building project? Get a professional assessment and design.

In spite of the positive outlook, supply chain issues are causing uncertainty for the US solar industry in the near future.

However, the Build Back Better Act could give a major boost to the US solar industry, restoring the 30% federal tax credit that was available before 2020. The tax credit would also be extended until the end of 2026, no longer expiring in December 2023. Wood Mackenzie and the SEIA have forecast a 31% increase in solar installations under this scenario, compensating for the 25% slowdown caused by supply chain issues. 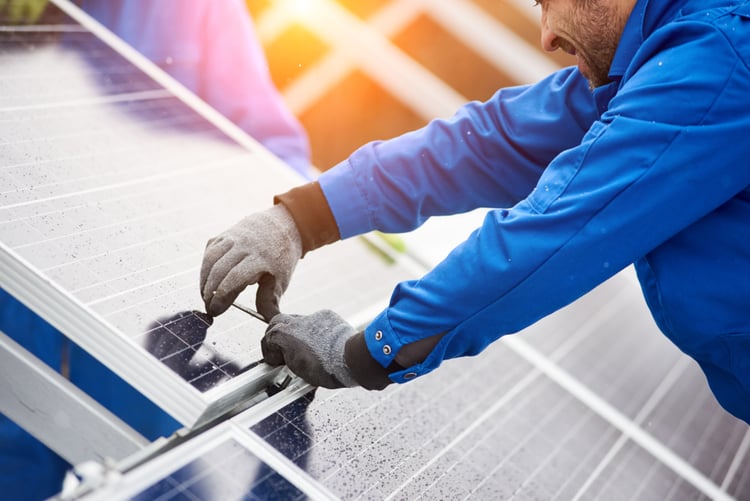 The Investment Tax Credit (ITC) first became available in 2006, and it has been one of the main incentives for solar power in the US. Before 2020, homeowners and businesses who installed solar panels could claim 30% of their costs as a federal tax deduction.

However, the Biden Administration plans to restore the 30% solar tax credit with the Build Back Better Act, while extending the benefit until the end of 2026. This would give a major boost to the solar industry, increasing installations by 31% according to the latest SEIA quarterly report. The proposed extension would also change how the Investment Tax Credit (ITC) works, and some projects would be eligible for deductions higher than 30%.

The following table summarizes the proposed changes to the solar federal tax credit, according to the US House version of the Build Back Better Act (November 19, 2021). This could change in the final version after going through Congress, but the outlook is very promising:

The BBB Act prioritizes job creation and products made in the US. The federal tax credit is much lower for megawatt-scale projects that fail to meet these conditions, but it also increases significantly if they comply. A solar project could potentially qualify for a 60% tax credit for meeting all possible conditions (prevailing wage, apprenticeship, domestic content, qualifying as a low-income economic benefit project).

Managing Supply Chain Issues in the US Solar Power Industry

Slow supply chains are having a negative impact on solar installation in the US: projects are being delayed, and installed costs per watt are on the rise. The AD/CVD petition would have caused a considerable price increase for solar components from some manufacturing hubs in Asia, but fortunately it was dismissed.

At the same time, the WRO is limiting imports from the Xinjiang region in China, where Hoshine Silicon Industry Co. operates. Solar developers can reduce the risk of shipment detention by demonstrating that their imported components are from outside of the Xinjiang region. Another viable strategy to deal with supply chain issues is using solar brands that are manufactured locally, since there is no need for marine transport.

Breaking Down the Price of Solar Power Systems

Solar Buyback and Net Metering Programs: What Is the Difference?