LED lighting is normally associated with electricity savings, but the technology also offers safety advantages over older lighting types. LED fixtures are safer for the installers and maintenance personnel who handle them directly, and their performance features also improve overall site safety. Some building upgrades are effective in some properties and ineffective in others, but upgrading to LED lighting is almost always a good decision.

Improve building efficiency and safety with an LED lighting design.

Incandescent, fluorescent and HID bulbs use glass, which means they can shatter with impact. This is dangerous for everyone involved, since shards of glass are sent flying in every direction. On the other hand, LED lamps can be manufactured completely with shatter-free materials, eliminating this risk. This is a significant advantage in applications where food and other sensitive products are handled, since the risk of contamination with glass pieces is eliminated.

For a given fixture type and application, LED products tend to weigh less than conventional lighting fixtures, and this makes them easier to lift and manipulate. For example, HID fixtures are heavy because they use ballasts with iron cores, but this component is not necessary in LED fixtures for the same applications. Conventional high bay fixtures with aluminum reflectors typically weigh around 12 kg, while equivalent LED fixtures only weigh around 6 kg. 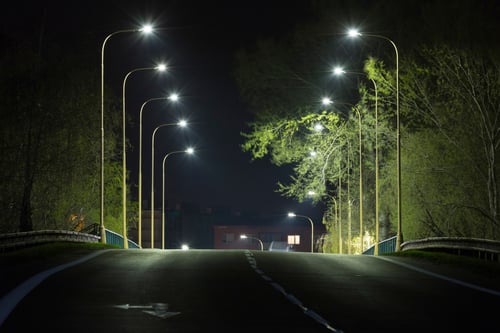 Consider that some LED products are manufactured with glass components, so don’t assume every lamp is shatter-free. This is common in decorative applications, where LED fixtures are often designed to replicate older lamps. For example, there are glass bulbs with LED filaments that mimic an incandescent bulb.

LED fixtures are also less likely to cause an accident during operation. Compared with older lighting types, the surface of LED lamps operates at a lower temperature, and only the heat sink behind the lamp gets very hot. If an LED lamp is touched accidentally, the risk of a burn is much lower. The lower operating temperature of LED lamps also contributes to fire safety.

The reduced power consumption of LED lighting is not only an energy-saving feature. If a building must run on backup power due to an emergency or a service interruption, LED lighting can last longer with the available power supplies, which are typically batteries or diesel generators.

LED lighting provides more time to evacuate a building while running on backup power during an emergency. The same applies for emergency lighting, which activates only when the electricity supply is interrupted.

HID lighting is commonly used in outdoor and industrial environments due to its potent output, but it has a significant limitation: if the lamps are disconnected from the power supply, they need several minutes to ignite again and reach full brightness. Even a few minutes in the dark can be dangerous in an industrial site with heavy machinery in operation, or a parking area with continuous traffic.

LED lighting can restart instantly when turned off, eliminating the risk of leaving an area in the dark for several minutes. This also makes LED lighting more suitable for automation, since it can be activated and deactivated without delay.

There is a common misconception that LED products are more fragile than older lighting systems, when actually they are more resistant. Conventional lamps have filaments and electrodes that can be damaged by vibration when installed close to large industrial equipment.

LED lighting offers excellent performance in the oil and gas industry: it has a reduced heat output and produces no sparks when activated, and this minimizes the risk of an explosion. However, consider that not all LED products are safe for hazardous environments, they must be rated specifically for those applications.

The long service life and sturdiness of LED lighting is an excellent feature in heavy-duty applications, where a sudden lighting failure causes severe risks for personnel. When lighting is critical for safe operation, the best option is using the sturdiest type available - LED.

Expert Tips for Choosing the Right Entrance Door for Your Business