How NEMA Contributes to Building Performance

The National Electrical Manufacturers Association, or NEMA, is the largest organization of electrical equipment providers in the USA. NEMA publishes standards that establish minimum performance requirements for electrical products, and they have achieved international recognition and application.

Founded in 1926, NEMA has existed for almost one century. The organization now has over 350 members, with more than 7,000 facilities and a total workforce of over 360,000. NEMA members produce over $106 billion per year in electrical equipment, and $36 billion in exports.

It would be impossible to provide a list of all the equipment covered by NEMA in this article. However, the products covered by their standards can be classified into seven broad categories: 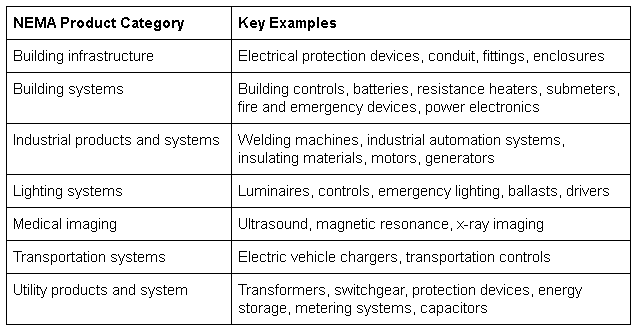 NEMA has a technical library with over 700 publications regarding electrical equipment, and 85% of their recommendations will be integrated in the 2020 National Electrical Code (NEC).

Many of the standards published by NEMA deal with the energy performance of electrical equipment. The organization’s energy policy focuses on three main aspects:

Energy efficiency provides benefits throughout the entire electric supply chain. The simplest way to provide additional generation is by reducing consumption at the point of use, which frees up existing capacity. NEMA emphasizes the role of equipment standards and consumer awareness in energy efficiency.

When a building owner wants to reduce energy costs and GHG emissions, energy efficiency measures are often recommended as the starting point. In many cases, these measures can achieve a payback period of less than a year, while providing long-term benefits.

Identify the most best energy efficiency measures for your property.

Transmission infrastructure is necessary to deliver electric power across long distances, which may cross state borders. A deficient power network hinders growth and slows down investment. NEMA considers that the current upgrade procedure for transmission infrastructure is too complex and expensive, and as a result the grid cannot keep up with economic growth. They recommend upgrading regulations according to the needs of modern technology, and simplifying the approval procedures.

However, many suppliers are developing smart grid technologies, and they are not always compatible. NEMA considers that standardization is necessary for an effective deployment of smart grid technologies, since they must be interoperable. Many existing regulations that slow down investment in transmission infrastructure are also obstacles for the smart grid. Cybersecurity is also an important consideration, since the number of connected devices will increase exponentially.

Some of the most relevant NEMA standards for property owners are those that deal with motor efficiency and transformer efficiency.

Electrical equipment selection is an important part of the design process. When a device is not suitable for the intended application, the consequences can range from poor energy efficiency to dangerous electrical faults. The best recommendation is getting a professional assessment from electrical engineers before proceeding with any equipment purchase.