New York State revealed its Energy Storage Roadmap in June 2018, which sets the ambitious goal of deploying 1,500 MW of storage capacity throughout the state by 2025. The roadmap analyzes the benefits this would bring for electricity consumers in New York, while proposing measures and incentives to help reach the 1,500-MW target.

The value of utility-scale batteries has been demonstrated recently by a 100-MW / 129-MWh Tesla battery that started operating in South Australia early in December 2017. The estimated cost of the unit exceeds $50 million, but it had already saved over $26 million during its first four months of operation. In other words, the payback period is less than one year!

New York State has seen massive growth in the solar power industry, in great parts thanks to the NY-Sun incentive program from NYSERDA, and there are also large-scale plans for offshore wind power. Both technologies are characterized by their intermittent energy output, providing an excellent chance to achieve synergy with energy storage - renewable sources allow a clean and low-cost power supply, while energy storage makes it stable and reliable.

Identify opportunities to save with energy storage in your building.

According to the Energy Storage Roadmap, adding 1,500 MW of storage capacity would deliver over $2 billion in savings for electricity consumers in NYS. The corresponding environmental benefit is also significant, since the avoided emissions add up to one million tons of CO2. In addition, statewide adoption of energy storage can create 30,000 new jobs by 2030. To get an idea of what 1,500 MW of energy storage represents, the value is equivalent to the power consumption of 20% of homes in the entire state of NY.

The main value of battery systems comes from their fast response and adaptable modular design. A power network can become more resilient when energy storage systems are found throughout the grid, and batteries can respond faster than most generation systems after events that disturb the power supply. Thanks to their modular design, batteries can be deployed for all types of installations, ranging from small residential to industrial. 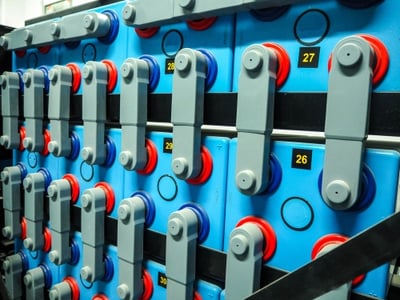 Among the general public, batteries are mostly viewed as devices that can store electricity to be used later, for example if you want use solar generation for your energy needs at night. However, they can also compete with fossil fuels by providing ancillary services to the grid, such as voltage and frequency regulation.

How NYS is Planning to Boost Energy Storage Deployment

Energy storage is not new in NY, since the state already has 1,400 MW of pumped-storage hydroelectricity (PSH). However, even though PSH has a fast response, it is outclassed by batteries in that aspect. Also consider that PSH is very demanding in terms of site conditions, while batteries can adapt to almost any building or location.

For homeowners and businesses considering energy storage, the main barrier is the upfront investment. The International Renewable Energy Agency (IRENA) has identified a downward trend in the price of energy storage globally, but the technology is still expensive, just like solar power systems a decade ago.

The Energy Storage Roadmap introduces various measures to boost the growth of energy storage in the state of New York:

Although energy storage is still an evolving technology, its potential to bring economic and environmental benefits is clear. There are abundant opportunities for synergy between energy storage and renewable generation in New York, considering there is a statewide target of 50% renewable power by 2030. As more storage capacity is added to the grid, it is possible to integrate more solar arrays and wind turbines, since their variability is compensated by storage.

Depending on their electricity tariffs and demand profiles, individual buildings can get significant benefits from an energy storage system. For example, properties subject to time-of-day pricing can shift their consumption from high-cost to low-cost hours, while properties subject to demand charges can trim off peaks in consumption with a storage system.