Panel boards are used to house all the components required for the distribution of electricity for lighting and heating, for the operation of appliances, and for power circuits. Also known as distribution boards and breaker panels, they may be designed according to critical panel board schedules that determine how much power will be required to operate various electrical components as well as other factors including control systems and overload assessments. 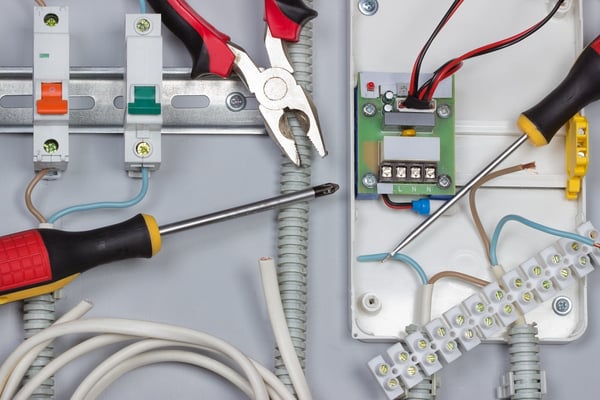 While power distribution systems for industrial facilities and commercial buildings are much more complex than those found in average homes, they are all designed to do the same job. Housed in a cabinet of sorts, panel boards are an essential component of any electricity supply system, and they include all the switches, fuses, circuit breakers and so on required for everything from heaters and compressors to lighting and utility, and heating, ventilation, and air-conditioning (HVAC) systems. A series of metering devices are incorporated to measure everything from power consumption to the way the system operates. While power may be distributed via various panelboards as well as transformers and switchboards, panel board schedules will track main and branch disconnects and the way protective devices operate, as well as switching devices so that power flow stops and starts again.

Ultimately, the panel board is a component of the electricity supply system that divides electrical power feed into subsidiary circuits. But, careful engineering is needed to ensure that the power distribution system is safe and stable, and supplies the power required for purpose. It is also important that there is capacity for expansion in case of future loads, particularly in commercial and industrial settings.

Panel board schedules customize panelboards so that they cater to the specific needs of the building and its inhabitants. A good mechanical, electrical, and plumbing (MEP) engineer will ensure that not only is the installation designed to be safe and energy efficient, but also cost effective for the client.

Critical factors of panel board schedules include determining the right sizes for control systems, conduits, and conductors. More specifically, load schedules ensure good management of electrical systems particularly during peak hours and when the system is under pressure for other reasons.

While there are national and Chicago-specific electrical codes that specify a myriad of requirements for panelboards, panel board schedules are specific to the building and/or facility and the needs of those involved. The MEP engineer needs to establish what the expected loads within the building will be and ascertain whether they are process loads related directly to the building or non-process loads like utility and control systems, lighting, and HVAC.

The MEP team also needs to determine what the various electrical properties for loads are, including current, voltages, absorbed and nominal ratings, and efficiency. Expected consumption for loads must also be evaluated so that the design, which is done prior to installation, meets all these demands.

MEP engineers will then design turnkey control panels for building automation that provides a single source solution for the building.

The National Electrical Code (2017), more commonly referred to as NFPA 70 because it was developed by the National Fire Protection Association (NFPA), provides a set of codes, standards, recommended practices, and guides that have been approved by the American National Standards Institute. Although utilized by all the US states, there are local laws and regulations that come into play. For instance, while Illinois in general and Chicago, in particular, have adopted this standard, the City of Chicago, like all other cities and municipal areas, has made modifications that are specified in their own local codes.

NFPA is a comprehensive document that is 881 pages long. It covers both residential and commercial buildings and everything in between including mobile and manufactured homes, and floating buildings, as well as upscale critical operations power systems.

The National Electrical Code defines a panelboard as a single panel or group of panel units that are designed to be assembled in the form of a single panel that includes buses and automatic overcurrent devices, with or without switches, that is intended for the control of light, heat, or power circuits. Panelboards are designed to be placed in a “cabinet or cutout box” that is placed against or in a wall, a partition, or some other type of other, and is only accessible from the front.

Incredibly, the original Code was developed in 1897 and it has been used nationally through the USA since 1911. Of course, much has changed with all the technological advances that have been made, and the most recent 2017 edition (the 54th) bears little resemblance to the original!

Experienced, well-practiced MEP engineers are familiar with the National Electrical Code as well as the local codes in the areas in which they operate. They will gather all the data together in terms of operating and peak loads for all the circuits in the system and prepare load schedules for variable circumstances whether the building or facility is operating normally or at peak.

New York Engineers doesn’t only operate in New York City but offers superior electrical engineering services in Chicago as well as other cities. We offer fast turnaround times that are effective and accurate. It doesn’t matter how simple or complex your panel board schedules need to be, we will produce streamlined solutions for your building or facility.

The experience of our leading MEP team can be seen in hundreds of commercial, industrial, and residential buildings that have become a living/working portfolio of our work and commitment. And it isn’t just panel board schedules we specialize in. These are just one part of our whole house or whole building approach. Contact us to discuss how we can help you today.

3 Characteristics of a Good MEP Engineer for Franchise Rollout

Easy Process to Start Your Franchise