Steam Systems in Chicago are Outdated but Still in Use

In August 2017, the City announced that it was already “40 percent of the way to meeting the Paris Agreement goal” which they intend to honor in spite of President Trump withdrawing the US from the agreement.

While steam systems for heating were the best available option for buildings constructed from the turn of the 20th century until about 1930, one of the many issues is that steam systems in Chicago are horribly outdated, but many are still in use. The question is should they be replaced or upgraded? 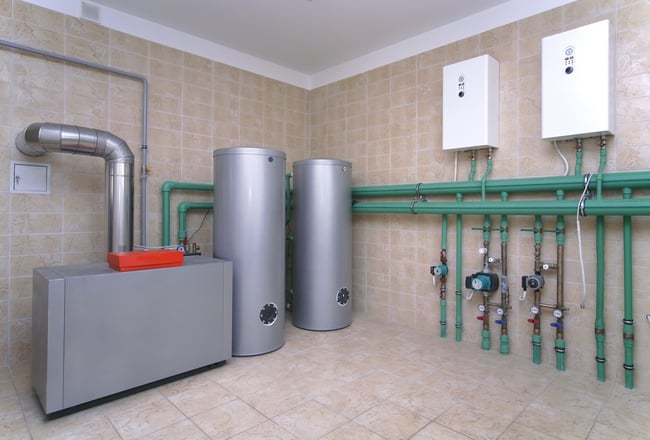 Boiler room with a heating system in a private Chicago house

Of course, Chicago isn’t alone in this quandary. Even though more efficient passive heating systems are preferred for new construction, more than 80 percent of large old buildings in New York City still use steam systems. Since steam-heating is one of the carbon-intensive methods of heating, things must change, albeit if it happens more slowly than many people would like.

While the Chicago Climate Action Plan aims to reduce greenhouse gas emissions by 25 percent by 2020, the Chicago Energy Benchmarking is a progressive process that is constantly being updated. This year (2018), there are 3,523 residential and commercial buildings that must comply with the benchmarking ordinance. Introduced in 2013, it requires the owners or managers of buildings required to benchmark to:

The City reports that in the three years from 2015 to 2017 cumulative energy savings from buildings that are benchmarking totaled $39.2 million in reduced costs and investments. In 2019, a new Chicago Energy Rating System will be introduced and properties required to benchmark will have to publicly post their rating and share it when the property is for lease or for sale.

In essence, steam systems for buildings provide heat through steam. The bulk of steam systems rely on steam boilers that are usually fired either by oil or natural gas. Some boilers are heated by electricity, but they are a lot more expensive to run. They are though easier to maintain and are more often found in large commercial buildings rather than in apartment buildings and homes.

Whatever fuel is used, boilers heat the water so that it turns to steam that travels through pipework to radiators or partially shielded convectors throughout the building. As the steam cools it condenses into water that flows back to the boiler to start the process all over again.

Because steam rises, steam systems don’t need a pump to operate, but when it is cold, they consume considerably more fuel than hot water systems that utilize pumps with a boiler … and the process results in more emissions.

Hot water boilers also rely on steam, but their use is minimal.

While very few people can afford to rip old steam systems out of their homes and other buildings that they own, there are ways to leverage energy data and identify inefficiencies in buildings.

One solution is to balance and tune steam systems, which is a separate issue from replacing boilers. In a report delivered to a Building America Stakeholder Meeting in Austin, Texas in March 2012, energy analyst Jayne Choi said that at least 70,000 of the 470,000 “multifamily” units in Chicago were steam heated. Even though many systems had been upgraded from coal to natural gas, and many had undergone “boiler displacement,” distribution systems that were not designed with efficiency in mind had not been improved.

She said old steam systems usually suffered from imbalance so those in the building had to supplement heat when it was cold or open windows when it was hot.

The problem was that contractors weren’t offering a balancing service or suggesting it as a possible solution. Even though balancing and tuning don’t require expensive equipment replacement, it isn’t tangible and does require time and dedication. Also, because natural gas is relatively cheap, many owners don’t think it is worth the time or effort.

Because uneven heating is unreliable it costs money. Balancing steam systems, on the other hand, results in energy and therefore cost savings, at the same time increasing occupant comfort.

An alternative approach is to upgrade steam space heating systems to improve efficiency rather than “upgrade” to a furnace system that will use a lot more electricity to operate. Some boiler professionals maintain that even simple retrofits can save thousands of dollars in maintenance costs.

Another solution is to sign up for the voluntary Retrofit Chicago Energy Challenge and reduce energy usage that way. Amongst other things, those who opt for the challenge are entitled to free energy assessments and rebates for appliances and products that are energy efficient.

The City quotes an owner of three residential buildings in Chicago saying that the retrofit program has made owning the buildings viable. “If you are a building owner making a large investment in your property, you have to incorporate energy efficiency,” he said.

Many building owners in Chicago have already taken advanced steps to curb energy consumption. For example:

Of course, every situation is different and professional input is essential if your old building is going to result in a similar success story. Contact our MEP engineering team for advice about your old steam systems.

Why You Should Submeter the Electricity Consumption of Tenants