A foundation wall for a building can be a cast-in-place concrete retaining wall, or a structural wall complete with load bearing pilasters. The most common materials used for this purpose are concrete and reinforced masonry.

Foundation walls accomplish two main functions: structural support and environmental control. However, they may also contain some components of mechanical, electrical and plumbing systems (MEP). There are also aesthetic considerations when designing foundation walls, since some parts of them may be exposed to the public.

Optimize the design of your MEP installations.

Foundation wall systems are designed to support vertical and lateral loads. They are fundamental elements of the building’s structural design, carrying loads from columns and upper floors. These may be considered as distributed or point loads for design purposes, depending on how they act on the foundation wall.

Foundation walls can also serve as a lateral resisting system for buildings. However, an earth retention system may be included to resist lateral loads, leaving the foundation wall with the main function of resisting vertical loads.

For foundation walls, moisture usually represents the biggest threat among environmental loads. Moisture controls specified during design may include multiple screens or barriers.

When the water table has a low level, most of the water can be controlled with an upper screen, an exterior drainage system, a near-surface drainage system, and an exit drain. The next design decision is whether to provide waterproofing and dampproofing for the foundation wall surface.

Insulation also has an important role preventing condensation on interior faces of the foundation wall. Internal temperature tends to be cooler in below grade areas, due to the insulating effect of backfill soil. Combined with poor air circulation, this factor can result in condensation. 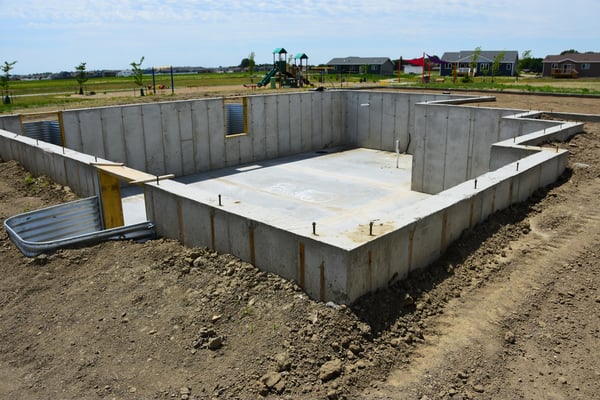 Similar to environmental loads, there are different requirements for internal and external finishes in foundation walls. Finishes for interior spaces will depend on usage - offices, storage, parking, machine rooms, etc. Some common finishes are paint, framed walls (drywall) and stucco. In some cases, the interior finish is simply the exposed surface of the foundation wall, such as concrete or masonry units.

The requirements are different for exterior wall surfaces located near grade level. Proper treatment of this area is critical in terms of aesthetics, but also for durability and performance.

To further protect this sensitive area and create a proper transition, the exterior facade element (brick, stone, etc) may be carried down just below grade level.

Electrical conduit and piping are some distribution systems that may be incorporated in foundation walls. These systems may run in the interior surface finish system, or within the ceiling space. Distribution systems in foundation walls must be designed carefully and with a high level of detail, since they may become conduits that transport air and moisture within the structure.

Like in any MEP design, Building Information Modeling (BIM) is a powerful tool to optimize the design and prevent clashes between components. When dealing with MEP components that interface with foundation walls, ease of maintenance is a very important design requirement. Otherwise, maintenance tasks for below grade MEP components can be time-consuming and expensive.

How Architects and Engineers Can Help Prevent COVID-19 in Buildings