- If you pick the right energy efficiency measures for your building, you can achieve an excellent ROI. A professional energy audit can help you identify the most promising upgrades.

- When planning energy upgrades, a very important decision is how they will be financed: paying upfront or using a loan.

- Loan financing makes energy upgrades easier t afford, since you can pay off the debt with the savings achieved. However, interest payments will consume part of your savings - you should look for the lowest possible rate.

- An upfront payment results in higher net savings because you avoid interest rates. However, you must assume a major expense at once, which impacts your cash flow.

Energy efficiency measures can achieve major savings when they are chosen properly, based on the needs of your building. For example, a high-efficiency boiler can offer an excellent ROI if you live in a place with cold winters. However, the same system will have a longer payback period in a place with shorter winters and higher temperatures on average.

Regardless of your building type and climate, an energy audit is the best starting point to reduce your electricity and gas bills. You will get a list of recommended energy upgrades with estimated costs and savings, which is very valuable information when planning your project. However, once you have chosen your building upgrades, there is an important decision: paying upfront or getting a loan.

Optimize your building with energy modeling, and save on electricity and gas bills.

An upfront payment is generally a better option for energy efficiency measures that have lower costs, and where you expect a quick payback period. Recommissioning services, building controls and minor lighting upgrades have low costs relative to their savings in most cases.

Loan financing is recommended for energy upgrades with higher costs, which also tend to have longer payback periods. For example, upgrading the envelope and HVAC systems of a large building can cost several million dollars. These projects are much easier to pay with a loan, unless the owners have access to large amounts of capital. However, picking the right loan is very important – a high interest rate can consume a large part of your energy saving, or all of them!

Energy consultants can easily identify the “low hanging fruit” – building improvements that can be completed easily, quickly and at low cost. Some of these measures can achieve a payback period of just a few months, and generally their cost is too low to justify the paperwork of a loan.

For example, if you have an office building with fluorescent lighting, there are LED retrofit tubes that use the existing fixtures and wiring. You can replace 32W fluorescent tubes with LED equivalents that consume around 18W, and they can be purchased in bulk for less than $10 each.

This is an example of an energy efficiency measure that can be easily paid in cash by a large developer, and the payback period is short. Keep in mind this is a simplified example – even minor upgrades should be analyzed carefully. However, a payback period under three years is typical for LED lighting. 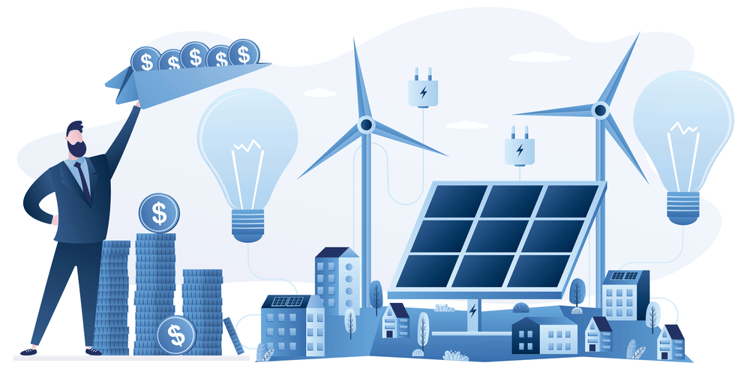 A loan eliminates the upfront cost of energy upgrades, but you pay interest in exchange for this benefit. However, loan financing is a viable option when the interest payment is small relative to the savings achieved. Your net savings are decreased slightly, but there are no out-of-pocket costs when the loan is fully paid by energy bill savings.

Deep energy retrofits can drastically cut the energy consumption of buildings, in some cases by more than 50%. However, a major retrofit is a very expensive project – a study by the Rocky Mountain Institute found that upgrade costs of $25 to $150 per square foot are typical. This means a project budget of $2.5 million would be optimistic for a 100,000-sf building.

C-PACE financing is an attractive option for building energy upgrades with long payback periods. You can get a repayment term of up to 30 years, giving plenty of time to pay off the loan with accumulated energy savings. Interest rates below 5% may be available depending on the credit record of your company, and the building where you use the funds can be easily sold.

C-PACE loans are repaid with property tax assessments, which means they are not bound to the building owner – if the property is sold, the loan is easily transferred. Commercial real estate developers can take advantage of this financing option, even if they plan to sell a building before the loan is fully paid off.

Generally, the best financing option for major energy upgrades is a low-interest loan. You can avoid a large upfront expense, and interest payments will be small relative to your savings.

Paying upfront is viable for energy upgrades with low costs and a quick payback. The paperwork associated with a loan may not be worth the effort in these cases.