Electric Motors: Choosing Between a VFD and a Soft Starter

Electric motors have many applications in residential, commercial and industrial buildings. However, motors must have suitable controls and protections to ensure a long service life and correct operation. When motors start at full voltage, the high inrush current and starting torque can shorten their service life. Several starting methods are used to protect motors from this, including soft starters and variable frequency drives (VFD).

Starters not only protect motors, but also other electrical devices and mechanical components:

When comparing a soft starter and a VFD, it is not possible to say that one device is better than the other. A soft starter is designed exclusively to start motors at reduced voltage, while a VFD can also control the speed of an operating motor. For a given motor horsepower, a VFD is more expensive due to its additional functions. Using a VFD for a motor that doesn’t require speed control is a waste of funds.

Improve safety and save energy in your building with a professional electrical design.

This article will compare soft starters and VFDs, mentioning some suitable applications for each device. Both devices use power electronics, but their internal components are different.

When to Use a Soft Starter?

A soft starter uses an array of six thyristors or silicon controlled rectifiers (SCR), to reduce the starting current and torque of a three-phase motor. A thyristor can be described as an electronic “valve” that only allows current in one direction, and only when a control signal is applied. Six thyristors are needed for three-phase power, since there are three AC voltages that switch polarity at 60 Hz - two thyristors are needed per phase, each for a different polarity.

When an electric motor uses a soft starter, the six thyristors are used as valves that limit the three-phase voltage. Instead of applying rated voltage at once, the soft starter cuts part of the voltage waveform, and this limits both the inrush current and starting torque.

The SCR circuit used by a soft starter can limit voltage, but the frequency stays at 60 Hz. Since the speed of a running motor depends on frequency, a soft starter cannot reduce rpm. However, this is not an issue in applications where the motor is always used at full speed.

Soft starters are useful when motors drive large loads that require a high current and torque to start rotating. These loads include industrial machinery, dust collector fans, and pumping systems with a constant flow.

When to Use a Variable Frequency Drive? 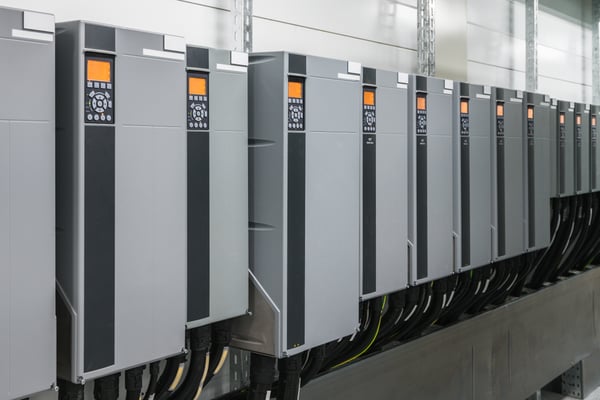 As mentioned above, a VFD can control both the voltage and the frequency applied to an electric motor. This means a VFD can be used as a starter, but it can also reduce speed in applications where the motor workload changes. Voltage and frequency control are possible thanks to a three-step process:

Since a VFD controls both voltage and frequency, it can also adjust the V/Hz ratio, which determines torque. Reducing the voltage of a running motor will normally cause higher current and overheating, which are detrimental for performance and service life. However, when voltage and frequency are both reduced, an electric motor can be slowed down without negative consequences.

VFDs are useful when motors have variable workloads, and energy savings above 20% are common with speed reduction. For example, a VFD can ramp down a building’s pumping system when water usage is low, or it can reduce ventilation rates when occupancy is low. In both cases, there is a great opportunity to save energy.

When motors start at full voltage, the high inrush current and starting torque can damage them and other components. Soft starters and VFDs both reduce the inrush current by limiting voltage, but there are also important differences between these devices.