Large electrical components like backup generators, transformers and switchgear are among the most expensive elements in electrical installations. However, wiring can also have a significant cost, especially in large buildings where circuits can be several hundred feet long. Wiring costs can be reduced by minimizing the distance traveled between power supplies and loads, and also by using smaller conductors whenever possible.

Consider that wiring only represents part of the cost of electrical circuits. Unless the conductors are designed for direct exposure, they must be installed inside a raceway or conduit. Electrical installations also use fittings to accomplish several functions, and the following are some examples:

All these components add costs to an electrical system, and consider there is also a skilled labor cost during their installation.

Optimize the cost of your electrical installation.

The cost of conductors decreases along with their wire gauge size, which means that circuits can become less expensive if they use the smallest conductor size possible. Of course, there is a lower limit:

To use smaller conductors while still meeting the NEC, the current carried by the circuit must be reduced. A lower current also minimizes voltage drop, allowing longer circuits with no need to increase the conductor diameter.

Reduced conductor sizes also allow the use of smaller conduit, which is less expensive and easier to handle. Electrical fittings also become cheaper, since their size is determined by conduit diameter.

The cost savings from reduced conductor sizes in one circuit are relatively small. However, the cumulative effect of downsizing many circuits can remove thousands of dollars from the project budget. There are many ways to reduce the load on electrical circuits:

Downsizing conductors is a viable approach in new constructions, since there is no existing installation. However, when power consumption is reduced in an existing building, electrical engineers do not recommend a circuit replacement unless the wiring is damaged. The existing conductors will end up being oversized, but they represent a cost that was already paid, while new wiring involves additional expenses.

Electrical installation costs can also be reduced by using an equipment layout that minimizes the total circuit length. The same logic used for smaller conductors applies here: a smart layout makes sense in new constructions and major renovations, but there is no point in changing an existing installation because the cost has already been assumed. 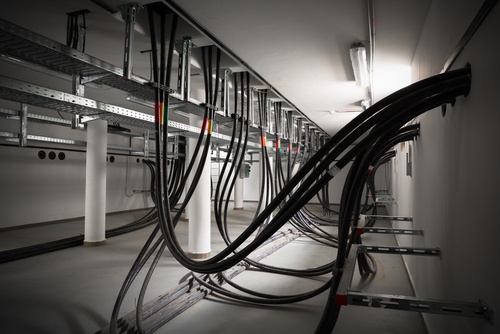 Electrical engineers can work with architects during the project design phase, to optimize the equipment layout and minimize circuit length. 3D modeling software such as Revit MEP can also be helpful, since it allows a visualization of building systems that is not possible with conventional 2D drawings.

In high-rise constructions, a simple way to reduce circuit lengths is by distributing all major electrical equipment around a vertical shaft. For example, if a  separate air-handling unit is used for each level, costs can be optimized by arranging them vertically. Distribution boards can also be installed close to minimize the length of feeder circuits. Electrical engineers avoid placing large equipment far from the main power supplies, since long circuits with large conductors are the most expensive.