The NYC Fire Department (FDNY) had to deal with a 5th alarm fire during the early hours of Thursday, December 13. There were no casualties during the incident, but a large backdraft explosion injured 12 persons, including seven firefighters.

The fire was detected at 2:14 am, starting in a restaurant called New York Style Eats, located on Queens Boulevard between the 45th and 46th Streets. The flames then spread through the space between the roof and ceiling, affecting five neighboring business and causing a partial collapse of the roof structure. The affected businesses include Zen Yai Noodle & Coffee, Sidetracks Bar & Restaurant, and a UPS store.

Thanks to efforts of more than 200 firefighters and 44 fire units, the flames were stopped before they could spread to more properties. The massive backdraft was caught on camera and the video was displayed on many media outlets, including the New York Times.

What Is a Backdraft Explosion?

Backdraft explosions like the one that happened on Thursday 13 are among the main threats when there is an active fire. They happen so fast, that even experienced firefighters may be caught off-guard.

To understand how a backdraft occurs during a fire incident, consider that a combustion reaction that needs three things:

When there is a fire in an enclosed space, there is an abundance of flammable material and heat is easily trapped. However, fire can quickly consume the oxygen in a poorly vented space. This is a very dangerous condition, since the fire appears to have calmed down. However, the affected space is actually filled with volatile particles at a high temperature; if fresh air is suddenly allowed into the room, the mixture burns violently and causes an explosion. 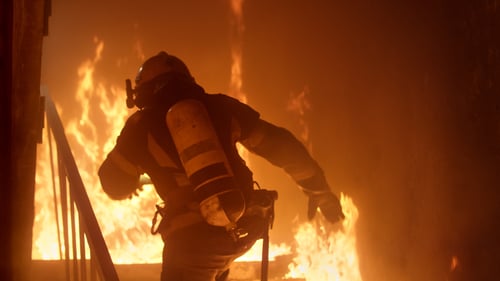 Many backdrafts are caused when a door or window is opened in a building area with an active fire. However, backdrafts produce many warning signs before an explosion:

If a room suddenly pulls back a large amount of air and smoke, a backdraft explosion is imminent. When this happens, firefighters normally evacuate the area immediately, and continue working against the fire when the explosion has passed.

When backdraft conditions are detected, heat and smoke cannot be released through horizontal openings like doors and windows - an explosion is triggered as soon as air enters the room. In these cases, firefighters normally open the roof to release the heat and smoke, since the upward movement of hot gases prevents an explosion towards the sides.

Fire protection measures such as automatic sprinkler systems can control most fires when they are still small, and in many cases only one sprinkler head activates before the flames are extinguished. Restaurants represent a unique challenge for fire protection engineers, due to the presence of cooking oil and other flammable substances.

Why Was the January 9 Bronx Apartment Fire So Deadly?