How Electrical Engineers Select Circuit Breakers and Other Protection Devices

Electricity has contributed greatly to the development of modern cities and industries, delivering energy faster and more efficiently than any other method known to mankind. However, the power of electricity also makes it dangerous, and buildings must be equipped with protection measures against electrical faults.

Electrical protections must allow the normal current drawn by devices in operation. They must also tolerate the brief current peaks drawn by devices like electric motors and lighting ballasts. However, when abnormal and dangerous currents are present, protection devices must disconnect the affected load immediately.

Circuit breakers are the most common type of electrical protection in buildings. They are designed to allow continuous current up to their rated value, and can also tolerate short peaks above this value.

Make sure your building project has reliable electrical protection.

When Do Circuit Breakers Trip?

A circuit breaker seems to be just one protection device, but most models actually have two protection mechanisms inside. One of them has an immediate response to disconnect the most dangerous electric faults, while the other has a delayed response to allow current above the rated value for a short time.

As previously mentioned, some devices draw current above their rated value for brief moments as part of their normal operation. The delayed protection mechanism allows this, but it opens if the current stays high for too long. The response of the thermal protection mechanism depends on current - a higher current produces more heat and trips the breaker faster.

Major electrical faults can cause currents of a magnitude hundreds of times above the normal operating current, and the load must be disconnected immediately in these cases. Here is where the magnetic protection acts, and the response depends on the type of circuit breaker.

For example, if a motor draws 3 times the rated current when it starts, you cannot use a Type B breaker or it will always trip. However, a Type C breaker will work fine because the motor inrush current is below the protection range.

If a motor jams when it starts, it will continue drawing the inrush current indefinitely. Although the magnetic protection of the circuit breaker does not respond in this case, the thermal protection responds to the heating effect.

Exactly What Do Circuit Breakers Protect?

Building owners are aware that circuit breakers protect electrical devices, but a less known fact is that they also protect the wiring between these devices and the power supply. Consider that wires have insulation, which melts with excessive heat. If this happens, the exposed wire creates a risk of electric shock, equipment damage or even fire.

Even if a circuit breaker has the right capacity to protect the devices connected to it, there can still be issues if the wiring is undersized. For instance, a 20-ampere wire connected to a 50-ampere breaker represents a risk, since any current above 20A and below 50A will overheat the wire without triggering the breaker. 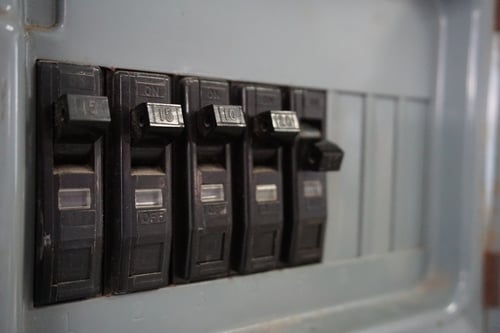 Note that the opposite can also happen: an oversized wire with an oversized breaker will not provide effective protection. As an example, assume a 15A motor is connected to a 50A circuit with a 50A breaker. If the motor is overloaded and drawing 25A, the wiring will not be damaged and the breaker will not trip, but the motor will most likely fail within a short time.

The normal approach followed by electrical engineers is first specifying wire sizes that will tolerate the load, and then specifying a breaker that will protect both the circuit and the devices connected to it.

Some applications require special types of protection that are not provided by conventional circuit breakers. For example, electric motors must be protected from undervoltage, which causes a drastic reduction of their service life. Three-phase motors also need protection against phase imbalance, which occurs when there is a drastic difference between the voltage supplied by the three live conductors. These types of protection are not provided by the circuit breakers normally found in homes and commercial spaces - there are special protection relays that are designed for these electrical disturbances.

Electrical protection can be complex topic, but it is very important for building safety. When circuit breakers and other protection devices are selected and installed correctly, buildings become much less vulnerable to fires of electrical origin.

Guide on Choosing a Residential Electrician

What is a safety switch?