The Role of Tower Cranes in High-Rise Building Projects

The skyline of any city will likely include at least a few tower cranes, which are among the largest pieces of equipment used in building projects. Construction companies use tower cranes to lift heavy materials such as steel and concrete. Large devices like acetylene torches, motors and generators are also transported using tower cranes.

Since tower cranes are slender compared with high-rise buildings, their lifting capacity can be easily underestimated based on appearance. How can the tower crane stand without tipping over? How is it capable of lifting so much weight? Does the crane become taller along with the building? In this article, the basic principles of tower cranes and their functionality will be discussed.

Tower cranes in general are composed of three main parts: the base, the mast or tower, and the slewing unit.

BASE: The base is the main support of the crane. It is connected to a large concrete foundation that carries the entire weight. 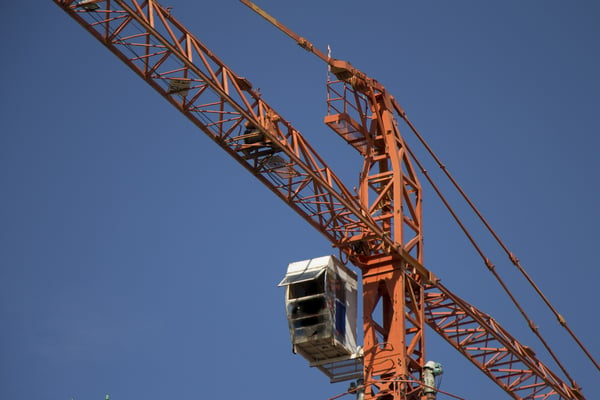 A typical tower crane has the following specifications, but note there are differences depending on the model and manufacturer:

Weather monitoring in construction sites is important, but especially when tower cranes are used. A strong gust of wind can destabilize the load and structure, causing a collapse. Project managers should constantly check weather forecasts, and avoid lifting operations with unfavorable weather. A weather monitoring system at the project sites can warn about dangerous wind conditions that are not covered in forecasts.

One of the first questions that may be asked by someone looking at a tower crane is these structures stand upright. There are several elements that contribute to the tower crane’s stability. The concrete pad is a concrete foundation made by the construction company several weeks prior to the crane’s arrival. Typical measurements for the pad are 30x30x4 feet (10x10x1.3 meters), with a weight of around 400,000 pounds. Large anchor bolts are deeply embedded in the concrete pad, and these elements support the base of the crane.

Tower cranes are delivered to construction projects in parts, which are then assembled on-site. Qualified installers assemble the jib and the machinery section, these horizontal elements are then positioned on the mast, which is only 40 feet tall initially. Once this assembly is completed, the counterweights are placed by a mobile crane. The mast rises from the concrete pad, and it remains upright thanks to its triangulated structure. To increase the crane height, the crew adds sections to the mast with a climbing frame:

These steps are repeated continuously until the desired height is achieved. Once it is time to remove the tower crane from the construction site, the crane disassembles its own mast and smaller cranes are used to disassemble the rest.

A Basic Guide To Construction Welding