US EIA: Renewable Energy Has Surpassed Nuclear and Coal Power

- Renewable generation surpassed coal and nuclear power in 2020, according to the latest data from the US EIA.

- Renewable sources provided 21% of US electricity in 2020, in second place after natural gas, which provided 40%.

- Nuclear and coal power accounted for 20% and 19% of generation, respectively.

The percentage of nuclear generation has remained relatively constant, but coal generation is decreasing rapidly.

On July 28, the Energy Information Administration published new data about electricity generation in the US. Renewable energy surpassed coal and nuclear power in 2020, becoming the 2nd largest electricity source after natural gas. The US generated 4,009 billion kWh in 2020, and renewable sources accounted for 834 billion kWh - 21% of the total.

The recent growth of renewable generation can be attributed to solar panels and wind turbines, which represent 81% of the total capacity added in 2020:

On the other hand, coal generation has been decreasing rapidly for more than a decade. Coal power reached its peak in 2007, when the US generated 2,016 billion kWh from this fossil fuel. However, coal only provided 774 billion kWh in 2020 - a 61% drop with respect to the peak value 13 years before.

Save on power bills and reduce your building emissions with renewable energy.

Natural gas provided 1,617 billion kWh during 2020, which is 40% of total generation. Natural gas is the most widely used fossil fuel in the power sector, but its CO2 emissions are up to 60% lower than those of coal.

In particular, Solar and wind power can be expected to continue growing at a rapid pace. Solar power surpassed 100 GW early in 2021, and the Solar Energy Industries Association has forecast an installed capacity of 250 GW by 2026. Onshore wind power reached the 100 GW mark in 2019 according to the US EIA, and Texas has been the leading state with 25% of total capacity. There are also many offshore wind projects being planned and designed, and the Biden Administration has a goal of deploying 30 GW by 2030.

Buildings represent 40% of total US emissions, and 66% of NYC emissions according to the Urban Green Council. A large part of these emissions are generated locally when buildings use fossil fuels like natural gas or diesel, but electricity consumption from the grid also has an environmental footprint.

Building owners have many options to reduce their emissions directly. These include equipment upgrades, building retrofits, conversion to cleaner fuels, and onsite renewable generation. However, emissions are also reduced when power grids increase their percentage of clean energy sources, while reducing fossil fuel combustion.

Emissions from coal power plants can exceed 1,000 g of CO2 per kilowatt-hour, but this can be decreased by switching to renewable sources or natural gas. For example, Local Law 97 considers 0.000288962 tCO2-e per kWh for electricity consumption in buildings, which is around 289 gCO2-e per kWh. 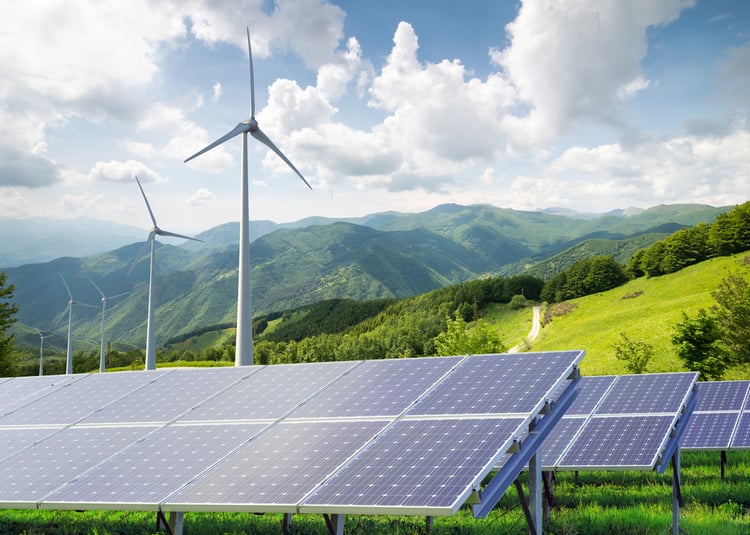 Solar and wind power are growing fast in the US, but their main challenge is reliability. You can control the amount of coal or natural gas being used in a conventional power plant, but not sunlight and wind.

Many power grids still rely on natural gas as their main electricity source, since their production can be increased rapidly according to consumption. Hydroelectricity also offers this flexibility, but not all states have adequate conditions to use it in large amounts. There is also a major environmental impact: hydroelectric turbines don’t produce emissions while operating, but they depend on reservoirs that block rivers while flooding ecosystems.