How Much Carbon Pollution Is Avoided with Solar Panels?

- Solar panels from reliable manufacturers have a rated service life of 25-30 years, but they can last longer.

- During its service life, each solar panel keeps several hundred kilograms of CO2 from being released.

- The avoided emissions are higher when solar power replaces high-polluting electricity sources like coal and diesel.

- Installing solar panels is also an excellent financial decision, and owners can often achieve a payback period of less than five years.

The financial benefits of solar power have been proven worldwide, and the US surpassed 100 gigawatts of capacity early in 2021. Going solar makes sense at all project scales, ranging from home systems with less than 20 panels to utility-scale solar farms with thousands of them. The upfront cost of solar panels is recovered multiple times during their service life of over 25 years.

Other than having an attractive ROI, solar power has major potential to reduce carbon emissions. Unlike fossil fuel power plants, which produce vast emissions during their service life, the impact of solar panels is mostly limited to their manufacturing, delivery and installation process. Once they are set up, they can generate electricity for decades with zero emissions.

The amount of carbon emissions avoided by solar panels will depend on their productivity, and also the electricity source that is being replaced. For example, a 100 kW solar array that replaces coal power in a sunny location will avoid more carbon pollution, compared with a 100 kW array that replaces natural gas power in a location with modest sunshine. However, both systems will have an environmental benefit regardless.

Here we will discuss the carbon-saving potential of solar panels, focusing on what building owners can expect in New York City. However, the same concepts apply in any location. 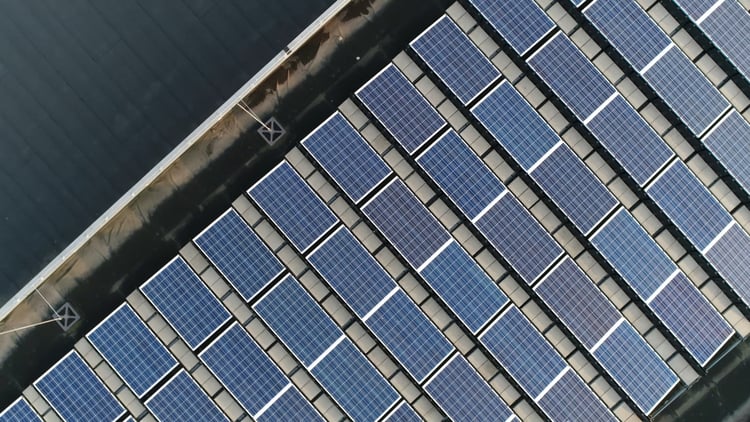 The emissions avoided by solar panels will depend on their productivity, since each kilowatt-hour generated by them displaces one kilowatt-hour from the grid. The Global Solar Atlas from the World Bank Group can give you an idea of the local generation potential.

Assuming you have a favorable site in NYC, you can expect to generate over 1,400 kWh/kWp, and this translates into avoided emissions. To demonstrate the potential emissions you can avoid, we will calculate the benefit of using 1,000 solar panels with a rated capacity of 350W each. The total capacity of the solar array is 350 kW, and you can expect an electricity output of 490,000 kWh per year.

All solar panels lose some generation capacity each year, but the degradation rate is normally under 0.50% per year for high-quality modules. Taking this into account, the 1,000 solar panels in the example above would generate around 11,515,000 kWh over a 25-year period. The next step is calculating how this clean electricity translates into avoided carbon emissions.

As mentioned above, the exact emissions avoided with solar power will depend on what electricity source is replaced. Generally, these emissions are measured in metric tons of CO2 equivalent per kilowatt-hour (tCO-eq / kWh). However, in the case of NYC we have a very useful reference in Local Law 97 of 2019, which provides emission factors for several sources.

LL97 of 2019 penalizes emissions above the building limit at $268 per metric ton. In this case, the solar panels would be saving the building owner $891,743 in carbon penalties, in addition to their electricity savings.

The US EIA reports an average commercial electricity price of 18.36 cents/kWh for New York (latest data as of October 2021), and the 11,515,000 kWh are worth $2,114,154 at this price. Considering both the electricity savings (at present-day price) and the avoided emissions over time, these 1,000 solar panels are saving their owner more than $3 million over 25 years.

This is a very simplified calculation, since electricity prices are always changing, and NYC could modify the emission factors and penalties in LL97. However, this estimate gives an idea of the carbon emissions and electricity bills that can be avoided over time with solar power.

Also, keep in mind that solar panels can help you meet Local Laws 92 & 94 of 2019, which make green roof systems mandatory for many building types - solar panels are accepted for this purpose.

How Much Emissions Are Caused by Each Energy Source in a Building?