Instigate water-saving features on your property such as irrigation by utilizing advanced methods of stormwater management.

Commit to long-term sustainable goals by complying with the performance standards of NYC Green Infrastructure Plan. 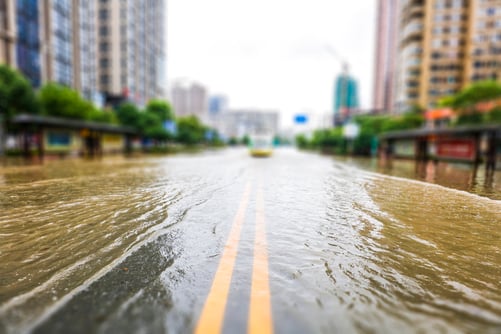 New York City is hailed as one of the busiest cities in the world, and one of its biggest challenges considering the devastating impact of Hurricane Sandy, is its stormwater design and management. Take note, stormwater doesn't only refer to the rain itself, but it could be all kinds of meteorological phenomena such as sleet, snow and hail stuck on top of roof gutters and drains. Hence, the flow rate of stormwater can propose real challenges, to which Department of Environmental Plan (DEP) delivers solution in the form of controlled flow rate from your development lots to the sewer system for overflow mitigation.

As licensed engineers working collaboratively with New York City's DEP, we play a big role in weaving effective stormwater designs into the urban fabric of the city, particularly called NYC Green Infrastructure Plan. Stormwater design and management in New York City can be particularly data-poor, but we work through these intricacies to produce efficient and sustainable results.

As responsible local citizens or qualified professionals partaking in the city's sustainable movement, it is imperative for you to understand the two principles behind effective stormwater design: detention and retention.

Due to the urban landscape of the city, impervious surfaces are greater than the pervious ones—meaning, stormwater which should have been disposed straight into the ground or evaporated through heat is dormant as a surface runoff, resulting into uncontrolled flooding when flow rate exceeds the allowable discharge rate mandated by New York City.

Imagine the scenario when calamities such as storms and hurricanes hit the city. This is why as responsible professionals, New York Engineers work with the government to implement stormwater designs which will cater to the long-term sustainable goals of the city. Every success story has its own baseline point, and all takes is understanding the principles behind since these dictums serve as the precursors for your suitable selection of stormwater design.

Subsurface systems are mainly designed for stormwater detention, where surface runoff is stored for a shorter term then released into the sewer system afterwards. Where feasible site conditions occur including design, siting and construction, subsurface systems can also render retention—in such a way that all open-bottom systems allow for soil infiltration with the exception of closed-bottom vaults and tanks.

Together with our highly skilled team of engineers, we will tackle all four subsurface systems below for your pros-and-cons comparison:

Typically constructed from precast concrete, cast-in-place concrete or corrugated metal pipe (CMP), storage vaults and tanks are closed concrete systems useful for sites with undesirable infiltration, constrained space or internal systems. However, cross out all these site criteria above and you can overhaul your storage vaults and tanks from closed to open-bottom systems, allowing soil infiltration which effectively reduces the water detention level.

As its name implies, gravel bed systems consist of stone aggregate storage bed. These excavated systems filled with gravel usually take up a large contact area with the soil, rendering high infiltration rate when stormwater seeps through the spaces of your coarse aggregates.

Perforated pipes combine the two types of subsurface systems above—such that 4 to 48" parallel pipes which are embedded in gravel bed for stormwater holding capacity also act as your storage tanks, yielding you two-in-one benefits for your soil infiltration.

Similar to the third subsurface system mentioned, stormwater chambers are very much akin to gravel-embedded perforated pipes except for its intrinsic use of plastic storage chambers. Intended to be installed based from the manufacturer's specification, this prefabricated subsurface system gives you a dual advantage in stormwater storage through maximum void ratio in storage chambers and maximum void space in the gravel bed.

Which subsurface system you choose, New York Engineers ensure you that your stormwater design will cater to the most exacting specifications for optimal performance. 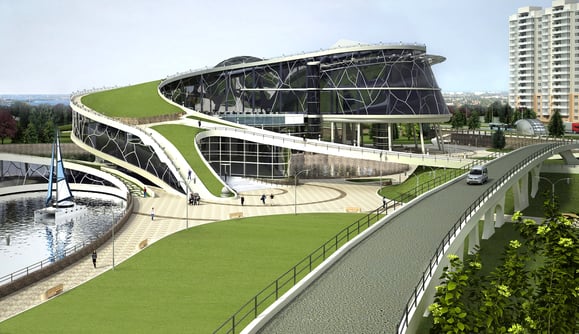 Different from subsurface systems with infiltration-based functions on below-paved areas or open spaces, rooftop systems serve as your solution to storing stormwater runoff in roof surfaces. With a primer on water detention, rooftop systems also offer retention for your property through evaporation or vegetative uptake instead of the usual ground infiltration.

Calculating the weight of these systems against your structural roof design for better performance, our expert engineers clue you in on the two types of rooftop systems:

Designed for water accumulation, blue roofs transfer your stormwater runoff from roof drains to sewer system in a controlled rate. The secret behind this regulation lies in the installation of weir or orifice on the roof drains—rendering blue roofs as controlled flow roof drain systems for roof slopes below 2%.

In the most obvious sense, green roofs utilize both soil and vegetation for the merger of detention and retention, respectively. Layers of soil on your green roofs cater to the rainwater storage, while vegetation consumes or evapotranspires stormwater as part of its biological uptake—giving you a dual competitive edge despite the challenges in its long-term maintenance. More versatile than blue roofs, green roofs sport a 5% roof inclination.

Subsurface systems per se have higher construction costs, while rooftop systems alone do not compensate enough for peak stormwater demands. For better stormwater design and management, you can opt for the combination of rooftop and subsurface systems—giving you a higher level of protection up and down your development lots. At New York Engineers, we cater to the specialized and combined storm water designs for your dual advantages. 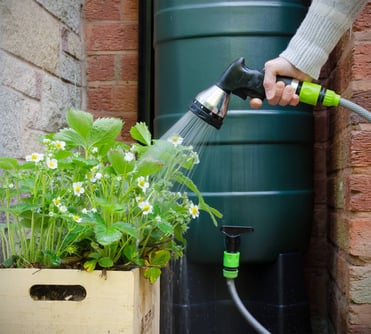 When subsurface and rooftop systems alone can't do the job, rainwater recycling saves the day. If your main target is to impose sustainability on your development lot in conjunction with DEP's stormwater performance standard, you can utilize rainwater recycling as an add-on sustainable measure on top of the individual or combined stormwater designs such as subsurface and rooftop systems.

Rainwater recycling connects your roof leaders to on-site storage tanks or cisterns, giving you several benefits in the form of:

As you can see above, all these benefits have one bottom line: rainwater recycling meets the three pillars of sustainability. From environmental awareness to social responsibility and cost-effective economic change, New York Engineers delivers you sustainable solutions in the form of rainwater recycling.

Selection of Appropriate Stormwater Design for Your Property

In selecting the most suitable stormwater design for your development lot, you need to take a lot of factors into consideration including their types, as well as their own specific applications. Scrutinizing every detail would ensure you that you get the best value for your money, as each type of stormwater design only caters to a tailored site condition.

However, as licensed engineers aiming for compliance on the NYC Green Infrastructure Plan, we are still operating on the fact that all of these stormwater design types are rooted in eliminating stormwater runoff and redirecting them back into the natural water cycle for regenerative sustainability.

The only point of difference is their siting considerations, which our engineers will delve deeper below for your better understanding:

There are a lot of factors at play when you choose your stormwater design such as existing sewer elevations, developer preferences, and infiltration rate. However, comparing their differences above, what we could draw on mainly is their location-based application: subsurface systems serve as your go-to when you have large areas outside building footprints such as lawns, parking lots and even basements, while rooftop systems can be configured above your structural roof in case of space constraints. Adding rainwater recycling into the equation can help you garner even more sustainable measures by reducing the required detention volume at a given site for constant in-site use. In the end, you need to understand the ins-and-outs of your property before you can ever begin to evaluate which stormwater design type will work best for you.

After conducting the technical and commercial compliance for final selection, the next move you should take is to concretize your stormwater design to reality through a pragmatic construction build sequence.

In line with the series of recommendations provided by DEP, here are some of the few deployment practices you should implement when you choose subsurface system for your development:

In any such case where you select rooftop systems for your stormwater design, our engineers also show you the construction learning curve for this specific application:

At this time where climate change poses a real problem, sustainability should be one of your top goals as a building client, qualified professional or facility manager. Start with LEED (Leadership in Energy and Environmental Design), where you can apply for any of the four certification levels through a point-rating system. Whichever pathway you choose depending on the occupancy type of your building project, you can utilize stormwater design for garnering higher points in your LEED certifications.

Below, our engineers show you how you can implement efficient stormwater design on your way to a LEED-certified facility:

From reduced potable water consumption to water-saving strategies, our number priority at New York Engineers is to overhaul your facility based from an efficient stormwater design standpoint.

We Target Your Sustainable Goals Through Stormwater Design

Sustainability ranks at the top of New York City’s long-term goals, and all for the right reasons. Be one with the community and participate actively in the sustainable development by employing New York Engineers for your committed efforts on weaving water-efficient stormwater designs into the urban fabric.