Our pre-action system designs are affordable and competitively priced. We design exactly what you need for the environment in which you operate.

Our design solutions are ideal for commercial and high-hazard industrial applications that need the protection of fine art, archival vaults, and computer centers. 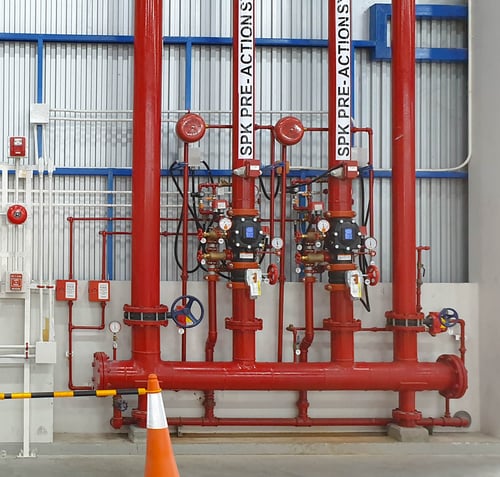 What is a Pre-Action System?

Pre-action systems for fire protection are one of four basic types of sprinkler systems. The other three are:

Essentially, pre-action systems combine the concepts of dry pipe and wet pipe fire sprinkler systems. Instead of a system that continuously has water in the pipework which is automatically discharged when there is a fire, an electrically or pneumatically operated pre-action valve in pre-action sprinkler systems restrains and controls the water.

Wet-pipe sprinkler systems are the most common type as well as being the simplest to design, install and maintain. They comprise a system of overhead pipes that contain water under pressure and closed sprinklers that are activated by heat. A reliable rule of thumb is that they should only be used when the sprinkler system remains over 40 °F/4 °C.

As their name suggests, dry-pipe sprinkler systems do not contain water. Instead, they are charged with air, and sometimes nitrogen, usually under pressure. A dry-pipe valve restrains the water supply interfacing the water and air. When a certain amount of heat is generated by fire, one or more sprinklers open, allowing air to escape, which, in turn, causes the air pressure to fall to a level that allows water to flow through the system to the open sprinklers. Dry-pipe systems are more complex to design and they present certain design restrictions, and also tend to lag in response. They should also only be used in an environment where the pipes will be exposed to temperatures below 40 °F/4 °C.

Like dry-pipe systems, pre-action systems utilize air-charged pipes, although the air pressure is not as high.

The discharge process in a pre-action fire sprinkler system has two stages:

The delayed action protects the environment against false alarms and the inadvertent activation of sprinklers. It is particularly useful in water-sensitive environments where particularly valuable and/or irreplaceable items are stored. These include buildings where fine art, important archives, and rare books are stored, as well as computer and data centers, laboratories, and anywhere else that contains equipment or items that will be severely at risk from water damage.

Deluge sprinkler systems deliver large volumes of water over specified areas. They utilize open sprinklers that are effective in stopping fires from spreading rapidly. The system is activated by a supplemental fire detection system. Deluge systems are ideal for facilities where highly combustible materials are used or stored or where thermal damage is a risk. 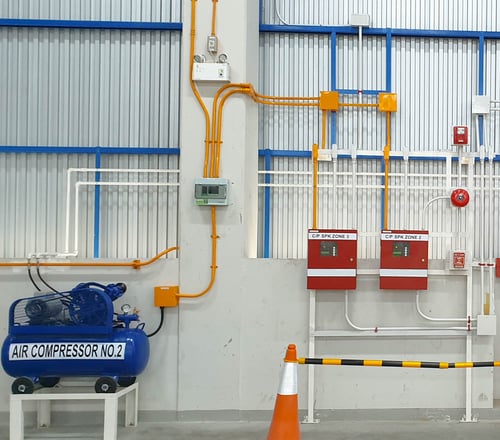 Single interlocked or interlock pre-action systems admit water to sprinkler piping upon operation of detection devices. They operate in a similar way to dry systems but require fire detection before the system is activated and water introduced into the piping via a pre-action valve. Typically this preceding fire detection is activated by a smoke or heat detector.

The valve, which is similar to a deluge valve, is mechanically latched and basically converts the system from being dry to wet. While it reduces the usually undesirable delay in delivery of water to the sprinklers that happens in dry systems, if the sprinkler operates prior to fire detection or the piping system starts to leak, the air pressure in the piping will decrease and activate an alarm that indicates there is some kind of trouble. If this happens, the pre-action valve won’t open and water won’t enter the piping.

If the piping is damaged or one or more sprinklers are broken the loss of air in the piping system won’t allow water to flow through the valve. It will, though, activate an alarm system that is linked to the system.

In accordance with NFPA 13 (see below), single interlock systems may not incorporate more than 1,000 automatic sprinklers that are controlled by any single preaction valve. 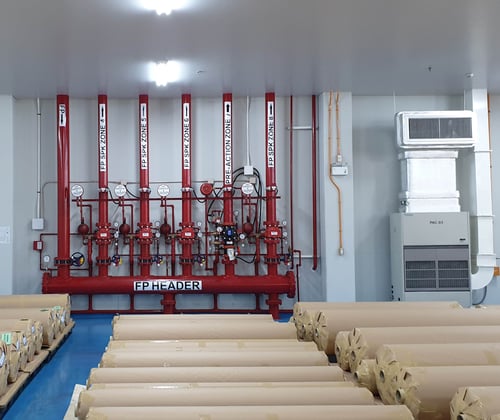 The actual operation of these systems is similar to deluge systems, except that automatic sprinklers are used instead of the deluge of water that results from a deluge system.

A double interlocked system won’t operate unless both the fire detectors and the sprinklers are activated.

However, in accordance with NFPA 13 (see below), the sizes of these systems is controlled by a double interlock pre-action valve. Additionally, the size of the system should be:

Double interlocked systems that utilize no more than 500 gallons/1,900 liters of water don’t have to meet specific water delivery requirements to the trip test connection.

Double-interlocked pre-action systems are commonly used in freezer facilities where the accidental operation of the valve could cause immediate freezing as well as damage of piping in the system.

Non-interlocked pre-action systems require the activation of the supplemental detection system or a sprinkler, not both. Activation of either of these initiates water-flow through the system.

Non-interlock systems operate with dry-pipe valves. The supplemental detection system is pneumatic or electric in design.

In accordance with NFPA 13 (see below), like single interlock systems, non-interlock systems may not incorporate more than 1,000 automatic sprinklers that are controlled by a single preaction valve.

While the NYC Building Code does cover sprinkler systems, the specification is that they should be designed and installed in accordance with the various NFPA standards, including those above and:

The Building Code also references NFPA 72: National Fire Alarm and Signaling Code, which contains the national standards for automatic sprinklers, standpipes, fire pumps, and fire alarm systems, as modified in Appendix Q of the Code to make the standards relevant to NYC.

While all sprinkler systems comprise integrated networks of piping and are activated by heat from fire that results in them discharging water over the fire area, the NFPA identifies 12 systems, all of which must be designed in accordance with fire protection engineering standards. These include a:

The section of any sprinkler system above the ground comprises a network of hydraulically designed or specifically sized pipes that are installed in a building, area of a building, or in a structure of some sort. This piping is usually installed overhead with sprinklers attached to it to create a systematic pattern.

A preaction sprinkler system is defined as a system that uses automatic sprinklers that are attached to a piping system containing air that may or may not be under pressure. It incorporates a supplemental detection system that is installed in the same part of the building or structure as the sprinklers.

Requirements for preaction systems include a specification that they should either be single interlock, double interlock, or non-interlock systems (see Types of Pre-Action Systems below).

If any of these systems incorporate more than 20 sprinklers, sprinkler piping and fire detection devices need to be automatically supervised.

The Standard also specifies which sprinkler types are permitted for preaction systems:

From January 1, 2021, a clause relating to actuator supervision kicks in. When an electric actuator from the preaction valve it controls is removed the requirement is that there will be an audible and visual indication at the system releasing control panel showing that the system is “impaired”.

Control valves control the flow of water to fire protection systems and NFPA 25 regulates theinspection and testing of these and other valves.

The Best System for Your Business

While not mandatory, pre-action systems are highly recommended for companies or organizations dealing with items and equipment that are water-sensitive as well as those in areas where wet-pipe sprinkler systems tend to freeze.

New York Engineers has extensive experience designing pre-action systems of all types. We will assess your needs to ensure that the system chosen is the best for your building and operations. Whether you need a non-interlock, single interlock, or double interlock system, you can be assured that our quotation will be competitively priced and affordable. Schedule a consultation today to see what our experienced team of specialist engineers can do for you.