Our solutions include harvesting rainwater and storing it for future use including for irrigation and for supplementing mains water. 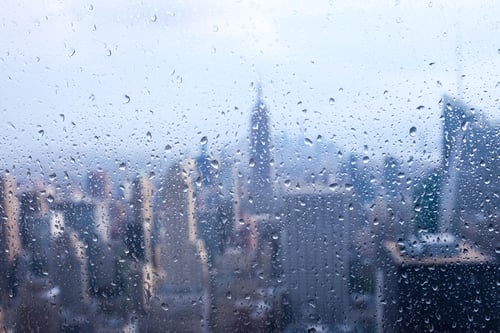 The Concept of Rooftop Detention

Rooftop systems are used to control runoff of stormwater and are particularly useful in urban environments where buildings have a footprint that covers most of the lot. There are two types: blue roofs that detain water and green roofs that retain water.

Rooftop detention is the heart of blue roof technology. It is a relatively simple concept that results in a controlled-flow system of rainwater from the roof. Instead of running off the roof via gutters and downpipes, the water is temporarily stored or allowed to pond on the surface and then released slowly so that it can drain away gradually. But a well-engineered design is essential.

The greatest benefits of rooftop detention in urban areas relate to the risks posed by inevitable flooding of streets and driveways as well as sewer back-ups in basements, all of which are minimized or at least lowered.

While the concept of blue roof assemblies dates back to about 2008, it is only relatively recently that they have begun to make a mark on mainstream roof design. The New York City (NYC) Department of Environmental Protection (DEP) has played a pivotal role in implementing the technology with proactive tests and pilot projects during the past decade.

Our experienced team of MEP engineers at New York Engineers has embraced the technology, designing blue roofs that are effective and sustainable. We offer highly efficient designs that not only handle excess stormwater in a sustainable manner, but also solve problems like sewage being swept into streams, rivers, and lakes during times of heavy rainfall. Additionally, we design green roofs that, like blue roofs detain stormwater, but instead of releasing it, the water is retained in soil on the roof and either absorbed by the roots of plants or transferred by evapotranspiration. Today blue roof technology is approved by NYC and guidelines for the design and construction of blue roofs are included in the detailed guidelines for stormwater management systems developed by the DEP and NYC Department of Buildings.

New York City recommends that a licensed professional is retained by owners to assume responsibility for progress and special inspections required by the construction codes for rooftop systems. Our services include this function.

How a Blue Roof Works

Considered to be a low-cost water detention option, blue roofs are designed with weirs that restrict the flow of water from roof drain inlets. The amount of water that can be detained and stored on the rooftop depends on the structural loading capacity of the roof and the specifications contained in construction codes. However, a safe rule of thumb is that ponding water should not be deeper than two to four inches and it shouldn’t be detained for longer than 24 hours before either being drained or transferred to a water tank or rain barrel.

Instead of streaming off the roof via gutters and downspouts into underground drains or combined sewers, the water is left to fill or pond to a predetermined depth before it is released at a specified maximum rate through specially designed controlled flow roof drains.

A blue roof designed for rooftop detention requires the installation of a waterproofing membrane in addition to waterproofing incorporated in the basic roofing system.

Blue roofs must be kept clean and clear of leaves and other debris that could clog drains. In winter, any accumulated snow should be removed from the roof, particularly if rain is forecast, to avoid the possibility of overloading that could damage the roof. No other maintenance is normally required.

A licensed professional will determine the reason for either of these problems.

Design Considerations for a Blue Roof 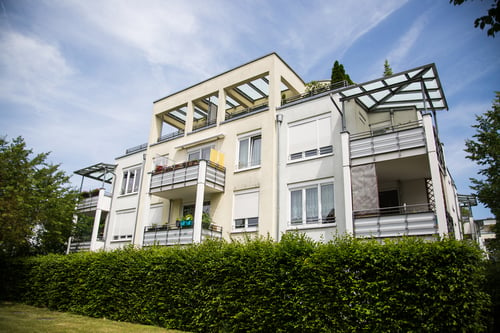 Rooftop systems, including blue roofs, effectively control runoff on a variety of sites, but it is essential that the site, building, and roof design are suitable.

In general terms, blue roofs are best suited to houses with flat or very slightly sloping roofs and they are ideal for buildings that have a large footprint covering all or most of the lot, typically 90-100% of the area. Where the non-roof area is significantly larger than 10%, we find that a combination of a subsurface and rooftop system is sometimes more effective.

Blue roof systems are best sited where there are no trees to avoid the risk of leaves clogging up drains and potentially causing excessive ponding.

Slope impacts significantly on blue roof designs. Ideally, the roof should be flat with no slope at all. If the slope is more than 2%, the volume of water that can be detained and stored will be limited. A greater slope will also result in deeper ponding and loads at the roof drains. Green roofs can be slightly steeper, with a limit of 5%.

Additionally, the roofing materials used in the blue roof design play a significant role and must be chosen with care. 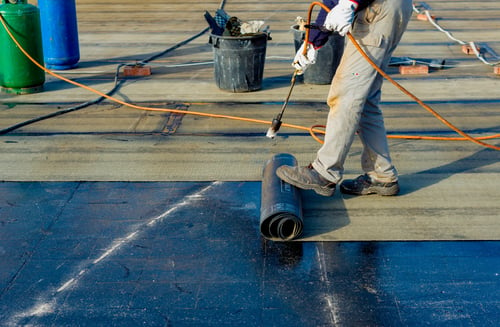 In addition to a conventional waterproofing system and insulation for a flat or nearly-flat roof, a blue roof design will include a secondary waterproofing membrane. Ballast may be required over the top of the roof assembly. If so, the roofing design will specify its depth and porosity.

Materials chosen for insulation, waterproofing, and other roofing materials should have a long life expectancy. Additionally, because a blue roof will involve water storage it is considered to be “wet system” so it is essential to confirm with manufacturers that their warranties cover this intended use.

The NYC School Construction Authority, a pioneer of blue roofs, recommends a hot fluid applied rubberized asphalt, fabric-reinforced roofing system for blue roofs in what is known as a protected membrane configuration. These comprise a layer of insulation covering the waterproofing membrane that is installed on top of the roof structure. A geotextile filter fabric and ballast may be included in the design.

Sizing blue roof systems involves determining how many drains should be included in the design as well as the release rate for each drain. Additional calculations include determining the depth of flow at each roof drain and the available storage volume.

Construction codes required at least two drains for controlled flow from roofs up to 10,000 square feet in size and at least four if the roof is larger than this. A formula is then used to determine the release rate for each drain. The depth of flow is calculated in accordance with the ponding depth and release rate. Ponding depth and release rate also determine the number of weirs used on the roof and whether they need to be customized.

Generally, the relationship between the ponding depth of the water and its release rate is nearly linear and is measured in gallons per minute per inch. Standard drain units provide a flow of 9.1 gallons per minute per inch. Non-standard drains may be sourced from DEP-approved manufacturers, in which case our licensed professionals include specifications and a rating curve on the site connection proposal.

Another critical factor is loading and the structural capacity of blue roofs. Rooftops in NYC are designed for a minimum live load of 30 lbs per square foot. Add just one inch of stormwater and the load will increase about five pounds per square foot.

Advantages of a Blue Roof

A Solution for Urban Density

In dense urban areas, the so-called soft landscape has been replaced with hard surfaces that results in surface water runoff reaching traditional drains more quickly and in larger quantities. The result is that when there are storms and extended periods of rain, these urban areas are often flooded.

When this happens in cities like New York that have combined sewer systems, the stormwater streams into the very same pipe network that carries sewage to the city’s wastewater treatment plants. So, with flooding comes the worst kind of pollution as well as contamination of sources of groundwater.

Blue roof design is a sustainable urban drainage system (SUDS) that is ideally suited to buildings that take up the entire lot or a major percentage of it. Instead of forcing rainwater to flow directly into an underground drainage system, surface water is collected and stored, and if necessary cleaned, before it is used or released back into the environment.

Blue roof design involves the detention of stormwater, which provides the opportunity to incorporate rainwater recycling and rainwater harvesting into the system. All that is required is for the water to be captured and then routed to cisterns, water tanks, or rain barrels.

While rainwater is harvested in most American states, it is severely restricted in Arizona, Colorado, Oklahoma, and Utah, all arid regions where water is a precious resource. Where water is mostly plentiful, harvested rainwater may be used for plumbing, for swimming pools, for gardens, for fire protection, even for consumption. In rural areas, it can be used for livestock.

New York State has even published a guide for harvesting rainwater that includes data relating to the amount of water that can be harvested legally. It also covers components of a rainwater harvesting system and discusses, in some detail, how to make rainwater safe for human consumption.

When a blue roof is used as a means to harvest rainwater, the catchment system must be designed with care. For instance, roofing material affects the quality of water and slope affects the quantity of runoff. A conventional roof that will feed rainwater into a tank would ideally be metal and have a reasonably steep slope. This won’t work with a flat blue roof design!

If you are considering harvesting rainwater from a blue roof, an experienced MEP engineer can advise on the best system for your building.

Blue roof systems are generally designed to hold a few inches of water on the rooftop for a short period of time, usually just a few hours at a time. But this relatively small amount of water pooling on the roof cools it down and effectively protects the roofing membranes from harmful ultraviolet radiation.

Blue roof systems may also help to regulate the temperature of buildings especially when light-colored roofing materials are used. When water is harvested and stored in tanks it can be used to reduce the load that a heating ventilation and air-conditioning (HVAC) system places on mechanical refrigeration equipment in commercial and industrial environments.

Some blue roof designs use stored water to cool solar panels, while green roof designs often use the water for irrigation.

When it comes to fire safety, blue roof designs are subject to the NYC Fire Department’s Fire Code just like any other roof design. In addition to compliance with specific design and construction processes relating to fire resistance and other regulations, these include the need for appropriate ventilation and access for the Fire Department in an emergency.

But when rainwater is harvested, payback comes in the form of water that is readily available for firefighting.