Your NYE team of design professionals will ensure that your gas piping designs meet all the heat energy, gas load, pressure, and safety requirements.

We know how important it is for gas piping designs to comply with the myriad of local, national, and federal laws. You can trust our expert engineers.

We liaise with the relevant utility company throughout the pre-construction phase to ensure that design layouts, permits, and schedules are compliant.

Natural fuel gas is recovered by drilling wells into underground pockets that contain the gas. This is then piped to residential and commercial buildings through professionally designed gas piping systems.

Natural gas can be liquefied under suitable elevated pressure in low temperatures to produce liquefied natural gas (LNG), which is ideal for transportation and storage. The American Gas Association confirms that this is one the largest source of natural gas used for gas piping systems in North American buildings.

Natural gas contracts normally specify heating values as well as the maximum amount of hydrogen sulfide required or permitted. Sometimes contracts state a limit of the amount of carbon dioxide and water that may be in the natural gas supplied.

Another commonly used gas is liquefied petroleum gas (LP-gas) in the vapor phase. It has two sources:

LP gas (often referred to as LPG) is controlled by the National Fuel Gas Code and about half of the gas used for heating and cooking in U.S. homes is LPG rather than piped natural gas. LPG includes propane and butane. While pure propane is commonly used in colder climates as a fuel gas, pure butane has a much higher boiling point and is not widely used as a fuel gas in the U.S. It is used in some warmer climates as fuel gas.

Mixing propane with air has the effect of making it burn in a similar way to natural gas.

It is vital that all gas piping design is 100% compliant with the relevant legislation and current codes including the National Fuel Gas Code, the Fuel Gas Code of New York State, and the NYC Fuel Gas Code.

The scope of each document is defined in each of the codes.

So, for example, the NFGC applies to the installation of all fuel gas piping systems and the equipment and appliances that are manufactured for use with natural gas, manufactured gas, LPG which is used in its vapor phase only, LPG-air mixtures, various other gas mixtures, and flammable gas-air mixtures. Storage, handling, and use of LPG are not included in the NFGC but rather in the more specific Liquefied Petroleum Gas Code (LPGC).

While the scope of the chapter on gas piping installations in the NYS code is essentially the same as the NYC Code, the scope of the chapter on general requirements is much more complex. This code is based on the International Fuel Gas Code with amendments, all of which are found in this section which is titled the New York State Uniform Fire Prevention and Building Code. The provisions of this “Uniform Code” apply to all new and existing buildings and structures, with a few exceptions.

This is all in addition to the myriad of other federal, state, and local laws, ordinances, administrative codes, rules and regulations – which is why our NYE team of gas piping design professionals has a thorough grounding of, and comprehensive experience in dealing with relevant legislation. 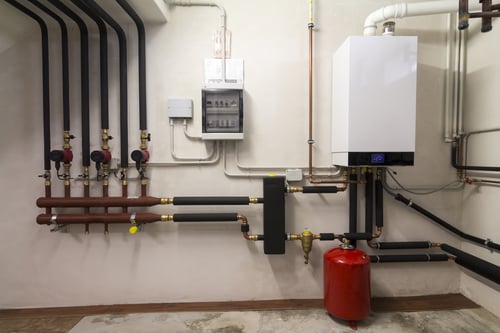 The size of pipes used for gas piping is vitally important to the design of gas piping systems. If pipes aren’t the appropriate size they won’t be able to supply sufficient gas to meet the maximum demand required at appliance inlets at the minimum supply pressure needed for the appliance to operate.

The codes regulate the allowable pressure drop for gas piping designs as well as the maximum pressure allowed. The loss of design pressure in piping systems under maximum “probable” flow conditions from the delivery point to the appliance’s inlet connection needs to be such that the supply pressure at the appliance is the same or more than the minimum pressure the appliance requires.

Furthermore, the gas in distribution piping running within buildings may not exceed a pressure of ½ psig or 3.5 kPa gauge.

The volume of maximum gas demand in cubic feet per hour is assessed from the input ratings provided by the manufacturer for each appliance to be served. There are times that this information is not supplied, in which case we contact the manufacturer, the gas supplier, or another agency that is qualified to provide the information.

The NYCFGC incorporates a table that may be used to estimate the volume of gas to be supplied for typical appliances used to provide heat, light, power, refrigeration, or air conditioning. For instance:

The codes also provide pipe sizing equations and tables for metallic pipe that assist with the sizing of gas piping, but the manufacturer’s installation instructions or other approved engineering methods may also be used. Only new materials specified in the relevant codes may be used for gas piping designs. This includes fittings and valves as well as the pipe itself.

The NYCFGC states that if a manufacturer recommends that a piping material not included in the code should be used, it can be investigated and tested, and if the Commissioner of Buildings approves, it may be used.

Only metallic steel pipe is permitted in NYC. Both carbon steel and wrought-iron pipe must be of a standard weight and it must comply with specified ASTM International (formerly the American Society for Testing and Materials) or ASME (American Society of Mechanical Engineers) standards.

Cast iron, copper, brass, and aluminum may not be used for gas piping in NYC. However, in some other parts of the State, copper and copper alloy pipe may be used if the gas contains less than an average of 0.3 grains of hydrogen sulfide per 100 standard cubic feet of gas. Specified aluminum-alloy pipe may be used in indoor environments.

Metallic tubing is not permitted in NYC although stainless steel flexible multiple leg hose assemblies may be used if:

This shows just how important it is for gas piping design professionals to be fully acquainted with, and knowledgeable about, the fuel gas legislation in different parts of the U.S. in general, and New York State and New York City in particular. 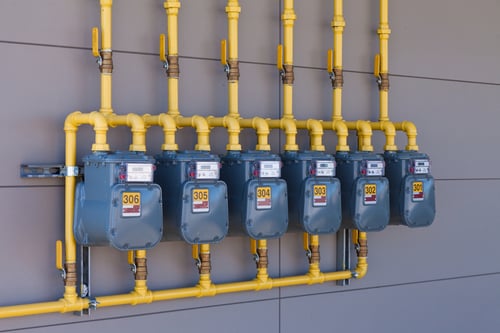 Another vital element of the gas piping design is the meter, which measures the volume of fuel gases. Meters are used at all buildings – residential, commercial, and industrial – where fuel gas is supplied by a gas utility company.

The gas usage of most customers is measured via a separate meter, although in some multiple dwelling buildings a common meter is used. Meter drawings form part of the gas piping design.

Although different gas utility companies have their own gas service and installation requirements, there is a lot of common ground. For instance, all family residential gas meters are normally installed outside. Other dwellings, commercial premises, and mixed-use buildings also place meters outdoors unless there is a waiver in place. Before the 1970s, they were usually located inside buildings, typically in garages or basements.

The NYC Code is specific in terms of where meters may and may not be located if they are installed inside. Generally, they should be located as near as possible to the point of entrance of the service and, ideally, in the cellar or basement, in an area where the meter can be easily read and inspected. Meters must also be protected against extreme heat or cold and properly ventilated.

Gas regulators and gas regulator vent outlets are also covered in the codes, with a strong focus on the minimum and maximum pressure levels. 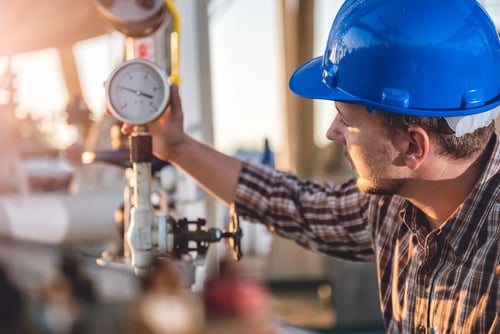 All gas piping installations must be inspected to make sure they have been completed in accordance with the gas piping design which must, of course, be in compliance with the necessary codes.

In NYC, distribution piping requires gas service authorization from the Department of Buildings (DOB). NYC meter piping pressure test verification is required for all new gas piping as well as alterations to, and replacement of, piping.

In terms of various new Local Laws, starting in 2018, the DOB performs final inspections on all gas piping systems and permitted system work. From 2019, a new Local Law requires all buildings except those in Group R-3 to be inspected periodically, at least once every five years.

Utility companies also have inspection requirements. For instance, Con Edison requires one of the company’s representatives to undertake a final inspection before they will release the gas meter and turn on the gas service.

Ultimately, if the gas piping design is correctly done according to the necessary standards and codes, and the installation is properly done, there shouldn’t be any delays.