Our ARCS design services take radio communication systems to a new level ensuring you and your employees remain safe in your building.

Our solutions start with the best design for your high-rise buildings and follow through installation to mandatory FDNY approval of the system.

Our ARCS solutions include improved radio systems for old buildings that need to upgrade alarm and radio communication systems.

Communicating in an Emergency

Communication is a vital factor during emergency situations in buildings. This includes fire and explosions, both of which can take out wired telephone and Internet systems in a flash.

But it took the fatal events of 9/11 to bring this reality home to the Fire Department New York (FDNY) and other officials. The most evident, hugely publicized, shortcoming for firefighters was their inability to communicate with the Fire Command Center that was located in the lobby of the Twin Towers.

In short, in the aftermath of the terrorist attack that resulted in a devastating inferno in the Twin Towers after two planes had crashed into the buildings, communications systems that relied on electric wiring were useless. This included a computer-aided dispatch system. At the time, radios were outdated and radio signals were adversely affected by the fire. Phones lines were jammed. Furthermore, Fire Department and police services personnel were not in communication with each other. Ultimately, evacuation efforts failed to be 100% effective and many lives were lost.

It is not clear why or how police communications were notaffected, although it seems that they had repeaters that improved communications.

A total of 2,763 people died at the World Trade Center after the airborne attack. This included 343 firefighters (60 of whom were off duty) and paramedics who had responded to the call, as well as 72 law-enforcement officers who were trying to evacuate occupants of the affected buildings. It took less than two hours for the two 110-story towers to collapse, which in turn caused the collapse of many other mostly high-rise buildings.

It took a while – nearly a decade – but NYC specified a code that would ensure implementation of a system that would enable firefighters to communicate with the fire command center in any building, regardless of circumstances. Critically, the systems they have introduced now allow the incident commander at a fire command center to issue an evacuation order all firefighters will be able to receive and respond to.

The initial fix for the FDNY was the introduction of high powered radios with batteries and antennas that FDNY firefighters were required to “wear” or carry. These enabled them to communicate effectively within concrete and steel high-rise buildings. These also eliminated the need to change radio channels and required no additional training.

The NYC Building Code was changed in 2008, eight years after 9/11, with a section on firefighter communications included for the first time. But there was a real need for a good interpretation of what an approved radio communication system was. This was developed by the FDNY Fire Prevention Unit. 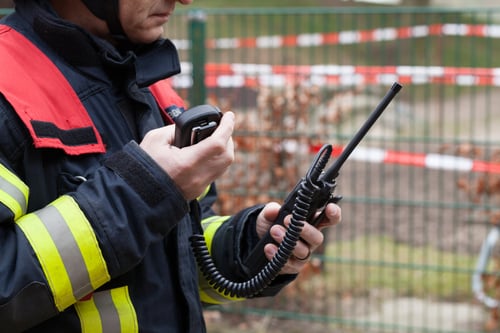 Auxiliary Radio Communication Systems (ARCS) are two-way emergency radio networks that are designed for installation in high-rise buildings, primarily for firefighters to utilize. They are now required by the National Fire Protection Association (NFPA) codes, and various city codes, including those that are relevant to New York City (NYC) buildings.

An ARCS is both bidirectional and wireless and uses exclusive FDNY radio frequencies that prevent interference. Its basic components include radiating cables, antennas, power supplies, radio amplification units (RAU), and dedicated radio consoles (DRC). Its layout includes a transceiver or base station that is connected to an antenna system that embodies the entire building. There is also a radio console in the lobby that adds to ease of access.

Ultimately, a properly designed ARCS system will allow seamless wireless communications for firefighters if there is a fire or other emergency in a building.

A key feature of ARCS is land mobile radios (LMRs) which represent a critical tool used by emergency fire responders, including firefighters, during emergencies. Portable LMRs are a lifeline, but users need to be sure that messages are both sent and received so that the appropriate action may be taken. Quite simply, without the ability to maintain lines of communication, firefighters and other first responders cannot enter buildings safely.

LMRs operate on public safety frequencies used by municipalities and it is vital that they operate at any place within a building at all times. While it is sometimes possible to get the necessary signal strength, many larger commercial buildings, tall high-rise buildings, and the underground basements of buildings do commonly need some sort of enhancement system because these locations tend to block or inhibit LMR receiving or transmission functions.

Various technologies are now available for in-building radio communication enhancement. These include radiating cable systems (also known as leaky cable) and distributed antenna systems (DAS), both of which are discussed later on. 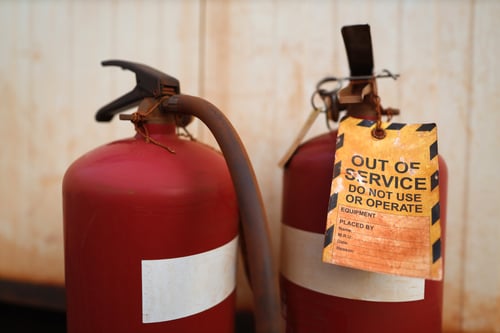 Today there are extremely strict rules, in the form of codes and regulations, to ensure that the design and installation of ARCS are 100% compliant and that they operate the way they are intended to operate.

Now, the NYC Fire Code has a dedicated section, In-Building Auxiliary Radio Communication Systemsin the chapter on fire fighting operations. This states that the design, installation, operation, and maintenance of any in-building ARCS intended for use by the fire department must comply with this section of the Code whether it is installed voluntarily or required by the NYC Building Code (see below).

Additionally, ARCS must be designed and installed in accordance with the various NYC construction codes which include the Building, Mechanical, and Plumbing Codes, as well as the Electrical Code. Installation must be done by a licensed master electrician.

All systems must be tested for compliance with Department of Building (DOB) requirements by someone with a Federal Communication Commission general radio telephone operator license. Once this “commissioning” test has been completed successfully, a detailed report of the results must be submitted to the DOB and an acceptance test requested to ensure that the ARCS is, in fact, functioning satisfactorily.

The Fire Code also mandates that in-building ARCS must be properly maintained. If it is out-of-service for any reason, a tag that identifies the system as out-of-service must be placed on the fire command center. This is the location where the status of detection, alarm communications and control systems are displayed. It is also where ARCS can be controlled manually.

Since 2009, the International Fire Code (IFR) has had a section, Emergency Responder Radio Coverage. It has also added a requirement for existing buildings that didn’t have approved emergency communication or radio systems to meet the requirements for new buildings. 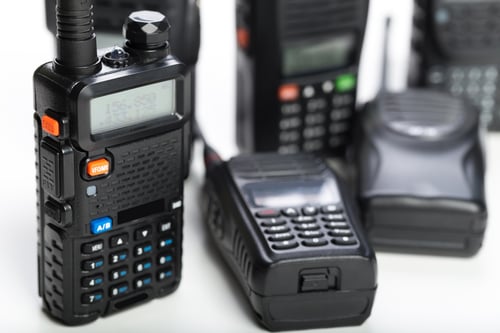 Since 2015, the NYC Building Code has contained a requirement for in-building radio communications systems to be installed and maintained in all new high-rise buildings. Like the Fire Code (see above), the Building Code has a dedicated section on ARCS: Fire Department In-Building Auxiliary Radio Communication Systems (Arcs). Similar in content to the Fire Code’s section on ARCS, it states that if an ARCS is required in terms of:

or, even if they are installed voluntarily, they must be installed in accordance with:

The NYC Building Code also specifies the construction documents required for review and approval prior to installation of the system. These must be submitted to the NYC Fire Department, which has the authority to call for additional documents.

At very least, documentation must include:

When it comes to acceptance testing, maintenance, and operational testing, the responsibility falls on the Fire Department and the requirements of NFPA 1 must be followed.

Additionally, operating, testing, and maintenance instructions, as well as “as-built” record drawings, and detailed specifications of all the ARCS components must be provided at a location that is approved in advance. 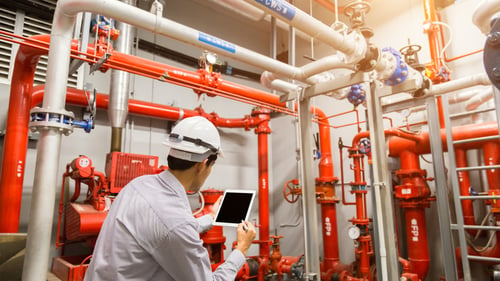 As mentioned above, both NFPA 1 and NFPA 72 are pivotal to auxiliary radio communication system design. NFPA incorporates extracts and references from more than 130 other NFPA codes, all of which are regarded as benchmarks, including:

Additionally, in-building emergency radio communication systems must be inspected and operationally tested in accordance with the requirements of NFPA 1221: Standard for the Installation, Maintenance, and Use of Emergency Services Communications Systems.

Technologies for ARCS in Buildings

Radiating cable systems broadcast radio frequency (RF) signals via a long, flexible antenna with slots known as a radiating cable. The slots in the cable have led to its nickname, leaky cable!

Radiating cable systems are passive systems that don’t amplify RF signals and tend to lose signal over distance. Their reliability is also affected by interference with RF signals.

Radiating cable systems are used to enhance the capability of emergency two-way radios and they are commonly installed in both new and existing buildings. The cable itself is available in multiple lengths and the antenna system can be installed in stairways, corridors, and mechanical shafts within buildings to ensure there is RF coverage throughout the building or facility.

A DAS comprises managed hubs and remote antennas that distribute an RF signal to a portable radio or LMR within a building.

A DAS may use active and/or passive components and it incorporates a base station or repeater that provides the signal. The signal is sent to the main hub that digitizes it and then distributes it to other hubs and radios through a high-bandwidth fiber-optic network. By digitizing signals, the DAS can transport them to any of the remote antennas that are connected, regardless of how far away they are from the base station and main hub within the building.

Like radiating cable systems, a DAS may be used in both new and built structures that need enhancement of their emergency two-way radio capability. Amplification systems and bi-directional amplifies are components of this type of system, so by focusing on base station signals at a specific area, the DAS can deliver more consistent coverage with higher capacity via its remote antennas.

New York Engineers specialize in auxiliary radio communications systems that comply with all the relevant codes and regulations to ensure your safety. If you own a high-rise building in NYC and don’t have an ARCS, you should talk to us.