Eliminate fire and smoke hazards on your building facility through the effective combination of damper types.

Fire smoke dampers instigate the restriction of both fire and smoke migration so you can get two-in-one protection.

Prevent migratory airflow and flame passage beyond the ductwork by keeping the integrity of your fire-rated barriers intact.

Where there’s fire, there’s smoke. Fire is often the leading cause of safety hazards in the building industry, and New York City is no stranger to this threat, thanks to the high density concentration and oversaturated population of the urban landscape.

Any fire hazard on your building is a product of three elements at play: ignition, fuel and oxidant. All these three factors connive with each other to produce a wide-spreading fire, and in any such case that your building is not designed for fire protection systems, then you risk your building occupants in the worst-case life-or-death scenario. Often, if you are the building homeowner or facility manager, this could spell liabilities on your part when your building facility doesn’t meet any of the stringent codes imposed on life safety systems. Local authorities having jurisdiction will more or less know if your building facility is up-to-date with the fire code, or was only code-compliant from the initial approval signoffs.

That leads us to finding the culprit for the fire hazard. Usually, in buildings where retrofit is much needed, fire starts from an isolated standpoint then usually spreads all throughout the other floors of the building through heating, ventilation and air conditioning (HVAC) ductwork system. Before you know it, fire swallows all the whole neighborhood.

Our engineers prepare for this undesirable scenario through proactive design: we install fire smoke dampers to mitigate the dissemination of fire hazards. Albeit not purely designed as a part of an active fire protection (AFP), fire smoke dampers play an integral role in putting a stop to what could be a potential disaster for your building facility. 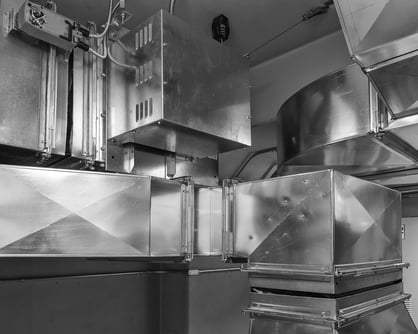 Understanding the Difference Between Fire Damper and Smoke Damper

Think fire damper and smoke damper are the same? Think again. Before we delve down deeper into the technical details of the fire protection system, we need to understand first the core difference between the two dampers. At Nearby EngineersNew York Engineers, we give you the learning curve on dampers so you can optimize your building facility for fire protection:

In all simplicity, fire dampers are devices you install on ductworks and transfer openings of air distribution or smoke control system with a core operation of closing mechanism upon heat detection. This is mainly to protect the integrity of your fire-rated walls, partitions or barriers, as well as to prevent migratory airflow and flame to and fro your fire separation. One key thing to note as per our engineers—fire dampers are equipped and operated with a fusible link rated 165°F up to 286°F as mandated under UL Standard 555: Standard for Safety for Fire Dampers. The core function of this fusible link is to hold the blades open, then close them once it reaches the melting link point to stop the flame passage.

As its name obviously implies, smoke dampers are designed to close upon detection of smoke. Different from the fire damper’s fusible link, smoke dampers close automatically through a smoke detection system or fire alarm—where operation can either be through a factory-installed electric or pneumatic actuator. If needed, you can also calibrate your smoke dampers to open and close from a remote fire command station, and design them as part of a passive or engineered smoke control system per UL Standard 555S: UL Standard for Safety for Smoke Dampers.

Where fire dampers cater to fire, smoke dampers take care of the passage of smoke. But what if you can get two-in-one benefits in a single damper? Enter combination fire smoke damper, where you can get the best of both worlds with fire and smoke protection. Imagine the fire-rating protection of an individual fire and smoke damper, then merge them together for double integrity—combination fire smoke dampers can detect any signs of heat and smoke concurrently for your convenience. In comparison to fire damper’s fusible link, this dual damper can be controlled using resettable electric heat release devices, preventing pressure problems from sudden closing mechanisms in the HVAC system.

Whichever damper you choose for your building facility, best be known that Nearby EngineersNew York Engineers combine both fire protection and mechanical engineering expertise to deliver the safest solution for you. 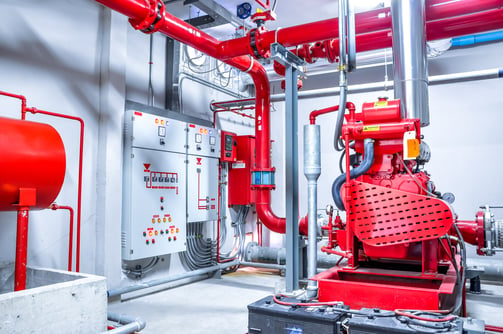 The only thing that active fire protection doesn’t address is the third item: containment. This is very critical and should not be treated as a lesser priority since more than the fire itself, the leading cause of death from fire hazards is the wide spread of smoke and toxic gases. Despite being designed as passive fire protection, fire smoke dampers play a critical role in saving lives through prevention of smoke passage on HVAC systems and fire compartmentalization. Our skilled engineers list some of the functionalities that you can get when you compartmentalize fire and smoke, such as: 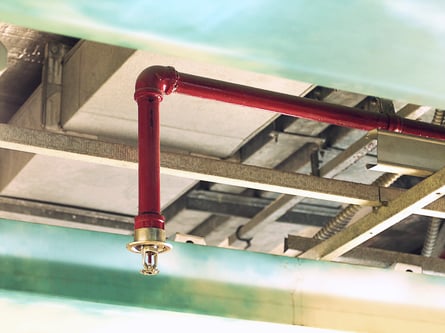 The Relationship Between Fire Smoke Damper and Automatic Sprinkler System

At the heart of every cost debate in the fire protection systems lies in the elimination of fire or smoke protection feature to offset the expenses from automatic sprinkler systems. In a few words, many consider prioritizing sprinkler systems over fire smoke dampers as they relatively put a direct relationship on high value and cost. With the latter being lower in costs, fire smoke dampers became an afterthought when sprinkler failures are the ones rising up steadily in numbers.

What exactly can this mean for the fire protection of your building facility? This cost bias on sprinkler systems often stirred up quite a controversy in the fire industry, as sprinkler malfunctions were neglected on purpose in the discussion. On a positive note of efficient planning, sprinkler systems operate 96% of the time, but we still can’t ignore the fact that sprinklered buildings still have an extensive smoke damage beyond the fire zone. In the event that you choose to eliminate fire smoke dampers and your sprinkler systems fail—rendering your facility as non-sprinkled due to malfunction or object obstruction—it is only a matter of time before this small flicker reaches a full-blown wildfire.

This is why you need both active and passive fire protection for your building. As conscious engineers who design for the holistic success of your fire protection design, we do not treat fire smoke dampers as a nuisance, rather they are installed as a critical support for the sprinkler systems. Since smoke migration often is the leading cause for mortality in fire hazards, sprinkler activation alone will not do the job of keeping all the building occupants safe. At Nearby EngineersNew York Engineers, we design for your safety. 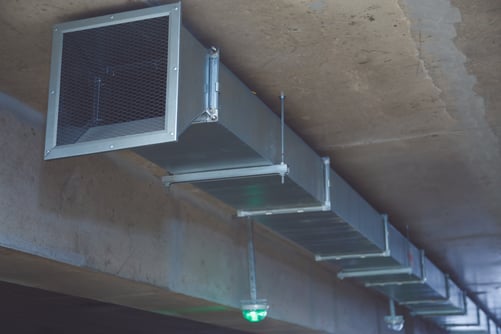 Factors You Need to Consider for Fire Smoke Damper Installation

Whether you choose any of the three dampers available, each fire or smoke damper follows stringent code requirements on construction, installation and operation as per NFPA 90A: Standard for the Installation of Air-Conditioning and Ventilating Systems. Given the code standards, this doesn’t only refer to the HVAC systems per se, but also the installation of fire, smoke or combination fire smoke dampers on your fire-rated penetrations.

To better experience the efficiency of your fire protection systems, you need expert engineers such as Nearby EngineersNew York Engineers to interpret correctly all the clauses in the fire building code. This can often cause confusion for novice code interpreters as applications of fire smoke damper can range differently in types of occupancy, barriers and partitions. Take note of this exception: some smoke dampers are allowed by code to be removed or operated separately within the installation of engineered smoke control system.

For your better understanding, we simplify the importance of planning, placement and control of your fire smoke dampers as follows: 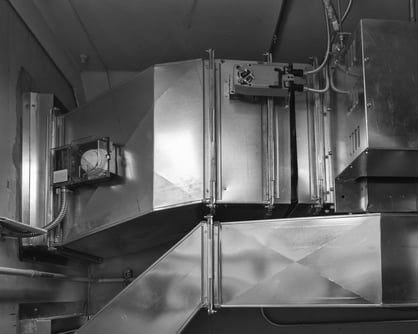 A Guide on the UL Safety Testing of Fire Smoke Dampers

Under Standard UL555S, your smoke dampers should undertake extensive testing certifications to get a label from Underwriters Laboratory (UL). For better listing, several damper sizes should be sent to UL for tests, including:

A smoke damper must be able to function after 20,000 full mechanical strokes, and then 100,000 full strokes consequently if also intended as a volume control damper.

The highest amount of leakage measured is commensurate to your smoke damper’s leakage class, where minimum leakage rating for UL qualification is Class II.

Additional safety factor is calculated into the equation of specified air velocity and pressure rating of smoke dampers, where minimum UL values include 2,000 fpm and 4 in. of water, respectively. 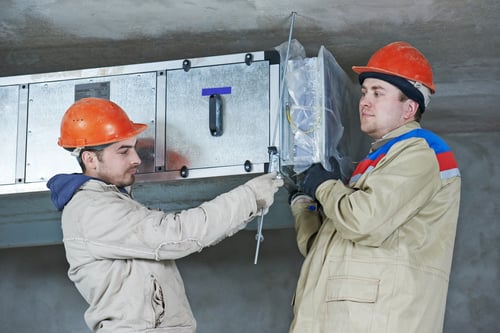 For further quality control, Nearby EngineersNew York Engineers subject your building’s life safety systems such as the mechanical-fire protection merger of fire smoke dampers to commissioning or acceptance testing. This gives you the assurance that you get your value-for-money on the proper operation of your fire smoke dampers by effectively ticking off design criteria items, such as:

All fire smoke dampers that pass the building commissioning process should undergo periodic performance testing as mandated by NFPA 80 or NFPA 105—where both codes cover the initial testing after one year of installation and every 4 years for frequency testing requirements, with the exception of hospitals on every six-year duration. 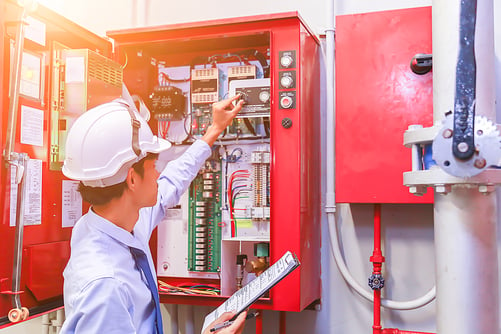 Invest in the all-in-one success of your building facility by integrating active and passive fire protection together. Schedule a consultation with us and let Nearby EngineersNew York Engineers show you how we can optimize the safety performance of your building through fire smoke dampers.