Our highly trained fire protection engineers have the skills and experience to design and develop the very best emergency voice/alarm communications systems.

The fire alarm systems we design are equipped to detect all the dangers of fire including heat, smoke, and carbon monoxide, ensuring your awareness of danger.

Our solutions include fully automated fire alarm systems that are designed not only to alert occupants and the fire department but also to start extinguishing the fire. 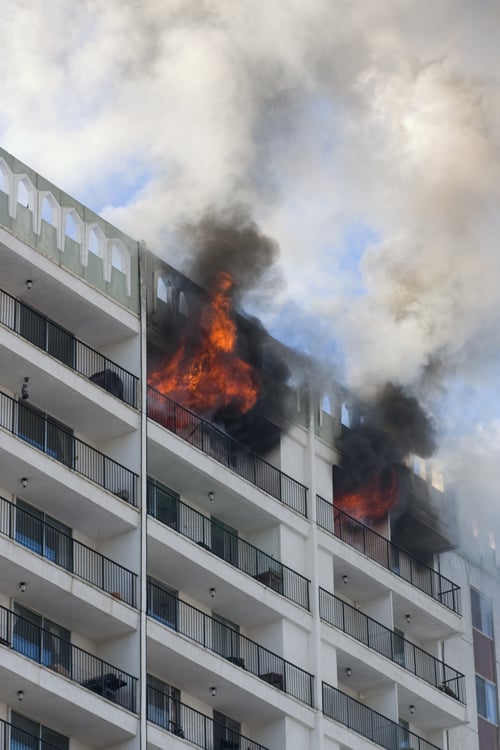 The High Rise Buildings Most at Risk

U.S. fire departments respond to thousands of structure fires in high-rise buildings every year. These cause deaths, injuries, and millions of dollars of direct property damage, which is why high-rise buildings that are not adequately protected and alarmed for fire incidents pose a real risk to residents.

But some high-rise buildings appear to be more at risk than others.

Research on high-rise building fires undertaken by Marty Ahrens, manager of Fire Analysis Services at the National Fire Protection Association (NFPA), involved fire incidents in the U.S. between 2009 and 2013 and data logged into the National Fire Incident Reporting System (NFIRS).

For the purposes of this research, high-rise buildings were defined as those with seven or more stories above ground. This is roughly the same as the NFPA’s Life Safety Code that defines “high rise” as 75 feet or 23 meters in height from the lowest part of a fire department vehicle access to the floor of the highest story of the building that can be occupied.

Published in November 2016, High-Rise Building Fires shows that five types of property accounted for 73% of the high-rise fires U.S. fire departments responded to during this period, though the vast majority were residential:

New York City’s Local Law 26 (see under Fire Protection for High Rise Buildings below) defines the height of buildings as the vertical distance from curb level to the highest point of flat roof beams or the point of the gable at its average height.

Local Law 26 also covers sprinklers, and amendments made to the legislation in 2004 made automatic sprinkler systems mandatory for all buildings 100 feet in height or taller, or more than six stories, that are classified for business use.

Where & Why High-Rise Fires Start

Marty Ahrens’ detailed research shows that fires generally start no higher than the sixth story, although this is not necessarily the case when high-rise fires are the result of a terrorist attack like 9/11, the deadliest high-rise building fire in history.

Only 47% of dormitory high-rise fires, 41% of apartment fires, 35% of office building fires, 31% of hotel fires, and 19% of high-rise fires in facilities caring for the sick started on the seventh story or higher.

It should not come as a surprise to discover that a large percentage of fires started in kitchens and cooking areas, particularly in facilities caring for the sick (89%), apartments and other multi-family dwellings (76% and 70% respectively), and dormitories (65% and 69%).

Another finding was that high-rise fires tend to spread less rapidly than those in lower buildings, and they are less likely to spread beyond the floor ore even the room of origin.

This data gives us the ability to continue to improve high rise fire alarm design and ensure it is increasingly effective – which is what New York Engineers does on an ongoing basis.

The City of New York has demanding fire protection requirements in the form of codes, laws, bills, and various NFPA standards.

The NFPA 72 National Fire Alarm (and Signaling) Code is a safety code for the installation of fire suppression and fire alarm systems.

While the NFPA does not have the power to police or enforce compliance of its Fire Code or standards, these codes and standards are used throughout the U.S. to determine compliance of the fire safety requirements of many regulations. For example, the NYC Building Code 2014 specifically requires compliance with NFPA standards for:

Also, where NFPA codes and standards use the word “shall” to indicate requirements, this generally implies reference to mandatory requirements by other codes or standards that have been adopted into law.

Apart from straightforward legal issues, the Fire Code, which is reviewed and amended every three years, provides for life safety by providing requirements that will reduce the probability of injury and death as a result of fire, explosions, or any other events that involve hazardous materials.

Further, the Code aims to provide an environment for occupants and members of the public who may be near to a building or facility that is “reasonably safe” from fire and similar emergencies. It also aims to protect emergency responders and fire fighters.

Elements defined in the 2018 edition of the NFPA 1 Fire Code, that are relevant to high rise fire alarm system design, include:

These definitions are all in keeping with those listed in the NYC Building Code 2014 which is, of course, legally enforceable.

High-rise buildings have many more occupants than lower, smaller buildings, even if they aren’t occupied all the time (for instance when they are used for offices). They also have very special requirements for fire detection and alarm systems.

Some of the most popular engineered fire protection systems and services include:

When professional engineers, like those at New York Engineers, design high-rise fire alarm systems we incorporate multiple elements to make the system as effective as possible.

The NFPA 1 Fire Code states in the section on Fire Protection Systems that both new and existing high-rise buildings “shall be” protected by automatic sprinkler systems that comply with the Code. They allow a period of 12 years from the adoption of the Fire Code for the sprinkler system to be complete and approved.

The Code also covers building fire alarm systems in detail stating that one or more of the following systems should be used for general fire alarm needs:

Essentially, whichever fire alarm system is used, early warning from automatic fire sprinklers and smoke detectors is an amazingly powerful tool to ensure that fires don’t rage out of control and that the occupants of buildings remain safe.

New York Engineers designs high-rise fire alarm systems and installs them in accordance with all the relevant codes and legal requirements for your peace of mind. Let us design the very best emergency voice/alarm communications system for your high-rise building.