If the centrifugal chiller design is inaccurately done, the execution could suffer. NYE makes sure this doesn’t happen to your project.

NYE knows how to make every project achieve its most efficient version. You can count on our highly efficient centrifugal chiller designs.

We also make sure that your project is bound to last. All components of your centrifugal chiller project are built to last.

Centrifugal chillers are widely used throughout North America, especially in major cities like New York, Los Angeles, Chicago, and the like. Compared to the other types of chillers, centrifugal types are often the most economical, and it’s the reason why they’re mostly preferred for cooling large buildings. If you need to instate a new centrifugal chiller in your building, you definitely need the right centrifugal chiller design made by expert design engineers like NYE.

We can establish the most efficient centrifugal chillers, so you can save on electricity bills and enjoy attractive paybacks you deserve. To do this, we thoroughly analyze your chilled water system to determine what works best for your setup. With NYE, expect to enjoy highly reliable and low-maintenance centrifugal chiller designs.

An Overview of Centrifugal Chillers

Before anything else, let’s have a quick overview of centrifugal chillers and find out what makes them different from the other types of chillers.

Basically, centrifugal chillers use a centrifugal compressor to spin the refrigerant vapor which comes from an impeller wheel’s center outward, allowing the centrifugal forces to compress it. Some centrifugal machines make use of more than one impeller for compressing the refrigerant via several stages. Due to that, they are considered to be the most efficient than any compressor type, especially at full loads. Since they only consist of a few moving parts, they only require low maintenance and can last way longer.

The problem with centrifugal chillers is that they are prone to surges (referring to the disruption of the flow of refrigerant vapor during low partial loads) which can result in noise, vibration, and even damage to the compressor. To resolve this, a technique called hot-gas bypass is used as a means of preventing surge but at the cost of a chiller’s overall efficiency.

The Basic Refrigeration Cycle of a Centrifugal Chiller 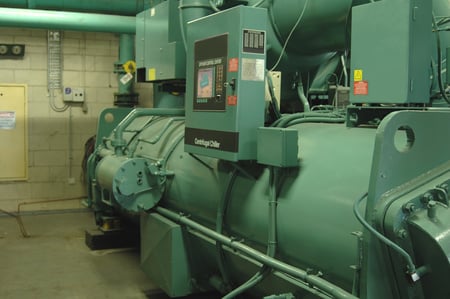 To give you an idea of how a centrifugal chiller should be designed and what you can expect from our design services, let us first start by knowing its basic refrigeration cycle. Basically, a centrifugal chiller makes use of the vapor compression cycle as a means of chilling water. It then rejects the heat it has gathered from the chilled water along with the heat gathered from the compressor to the water loop which is cooled by a cooling tower.

A centrifugal chiller normally contains four different components which are described below:

The evaporator is responsible for removing heat from the chilled water, lowering its temperature as a result. The removed heat is then used for boiling the refrigerant and changing it from liquid to gas.

The condenser is the complete opposite of evaporator in the sense that it condenses refrigerant from gas to liquid. However, just like the evaporator, it’s also often a shell and tube heat exchanger. Basically, heat raises the cooling water’s temperature, likewise known as condenser water. Afterward, it then carries heat to the cooling tower where it gets rejected outside.

Once the refrigerant is in its liquid form, it will then go through an expansion device whose task is to reduce pressure. It can be a simple system made of an orifice plate or a complex one such as an electronic modulating expansion valve.

Some high-performance centrifugal chillers use either an electronic modulating expansion valve or a thermal expansion valve for excellent modulation alongside a wide range of temperature conditions and capacity. Here at NYE, we make sure that all of the above components are taken into consideration. Efficiency, accuracy, and attention to detail are what we promise.

To make sure we can create centrifugal chiller designs that are centered around high efficiency not just in terms of performance but also in overall electrical costs, we have to make sure that the following features are put in place:

A significantly lightweight and compact centrifugal chiller design allows you to save a lot of space in your facility. Aside from that, it also makes transport and replacement a lot easier. By attaching downsized components, such as the economizer, we are able to achieve a highly compact but fully functional and highly-efficient chiller. Also, the fact that it’s modular means you can transport parts of the chiller separately even across tight spaces.

A modular design doesn’t just let you transport each module of your centrifugal chiller separately. It also makes for an easier and quicker installation. You can control module-by-module operation by means of several combination options. As a result, you can maximize partial load efficiency. Moreover, the presence of various installation options means you can customize the installation in accordance with your space and cooling demands.

We also make sure that our designs feature optimized central control. This allows you to use various control solutions to monitor your entire cooling system with ease. Aside from that, it also lets you control and manage your system anytime and anywhere you want.

Our design incorporates precision control which can significantly improve the partial load efficiency of your centrifugal chiller. This results in a 54% increase in overall partial load efficiency compared to other two-stage models which run at a fixed speed. As a result, you can enjoy even more savings on your electrical costs.

By simplifying the compressor’s structure, we are able to reduce noise from our chiller designs by up to 74 dB. This makes them applicable for use in areas that require low noise and vibration.

Other than the traditional centrifugal chiller system, we also create designs for oil-free chillers. Compared to traditional chillers, an oil-free system has a simplified piping structure which is made possible by getting rid of any oil-related parts. This means that it’s no longer necessary to replace oil or filters, allowing you to save more time and money. 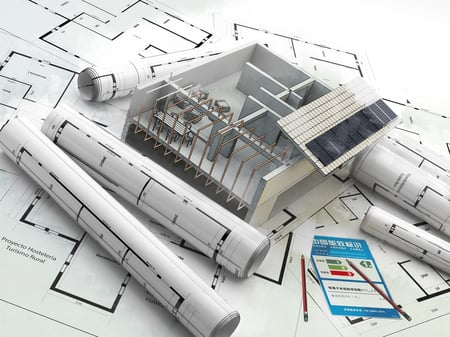 From the various manufacturing plants and industries to hospitals, food supplies, sports facilities, and more, our centrifugal chiller designs play an important role in supplying chilled water while maintaining a constant temperature at all times.

Whether you have a business facility, a clinic, school, data center, or a high rise establishment, our designs will certainly fit your needs. Here are the things you can expect from them:

Considerations for Your Chiller Design

In order to have a comprehensive design, we provide some tips that will help assess what you need for your centrifugal chiller.

For your centrifugal chiller design needs, and any other designing needs for your facility, we at NY Engineers are here to help. We are a team of skilled and experienced professionals in the field of MEP (manufacturing, engineering, and plumbing) design.

Our years of experience in the industry allows us to create highly efficient and foolproof designs using a number of valuable tools like AutoCAD and Revit. By working with us, you can expect high-quality and efficient designs for your facility.